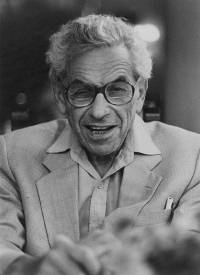 Pál Erdõs: born March 26, 1913 (Budapest, Hungary), died September 20, 1996 (Warsaw, Poland). Erdõs is arguably one of the greatest and most prolific mathematicians ever known. He is directly responsible for the creation of several fields of mathematical investigation (particularly in discreet mathematics), and contributed heavily to many others. He died at age 83 while at a conference in Poland.

For much of his life, Erdõs did not have a “permanent” home or academic position; instead, he travelled from city to city and country to country, staying with other mathematicians. During the height of McCarthy-ism in the United States, Erdõs was denied a visa to come into the U.S. He spent years in Israel, and only in the 1960s was he able to once again obtain a visa to the U.S.

Instead of complicated and difficult to state problems, Erdõs prefered more deceptive problems: those that are simple to state, hellishly difficult to solve, and which have short and elegant solutions. Such solutions are contained in “The Book”—a book only god has, from which he (god) occasionally grants us a piece of the puzzle. More than anything, Erdõs was the ultimate problem solver.

I met Pál Erdõs in the fall of 1995 while I was in Budapest, Hungary on the Budapest Semesters in Mathematics program. Erdõs came to give a lecture for us. After the lecture, in which he showed us several problems and solutions from ”The Book,” I had the opportunity to talk with him for a while—about math, literature, and philosophy. Erdõs easily had one of the quickest and most versatile minds I've ever encountered, and having a chance to chat with him was one of the highlights of my semester.

Below you will find a few links to other pages about Pál Erdõs: