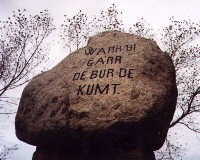 This is page two. That's 2. As in due, zwei, dva, kettö. Basically, I wrote too many “Random Thoughts”—over 90K—and needed to start another page.

Morons, dweebs, and brainless losers: This entry was motivated by some loser (“Bad Bunny” at Tripod) who signed my guestbook. Now let's get this straight. I love having people sign my guestbook. And since so few people have done so, I actively encourage people to sign it. Anybody. Write what you want. Honest. Still ... I would be happier if the people doing the above-mentioned signing actually had something to say. All the previous entries did to one extent or another. The people I didn't know previously provided useful commentary. People I already knew provided less, but were basically letting me know they'd looked at my site. “Bad Bunny's” entry, however, is just plain stupid. Let me repeat that”it is just plain stupid. First, I have no idea who “Bad Bunny” is. Sure, there is an e-mail address, and a URL. So? The URL tells me nothing”because the site it points to is LAME. L-A-M-E. (Am I sounding a bit bitter? I beg your pardon.)

Let me bitch about “Bad Bunny's” site for a minute, and explain why it sucks so badly. For reference, the URL is http://members.tripod.com/~mrxtc/index.html. How long it lasts, I do not know. First, there is a banner ad at the top. And an ugly one at that. Lots of clashing colors. It's supposed to hit me over the head, draw my attention, inspire me to click on it and be magically transported to some wonderful site that wants my money. Whatever. I never click on banner ads. They are boring. They are ugly. They are a waste of my bandwidth. Did I mention that they are ugly? Next. An animated gif file. Animated gif files have their place. Usually /dev/null. Bright, colorful, animated gifs that do nothing but annoy me with “moving” text saying “Welcome!” in a rainbow of colors belong there. Websites that use 6 or 7 different font colors, and 3–4 different font sizes, and all-centered text are a quick turn-off. Why? Random changing of font sizes, instead of helping to structure and present a page in a logical, clear, and useful manner, makes a page hard to read. I expect larger fonts to be used to tell me something is important or a section heading. I expect most text to be regular text ... statements. Information. Not imperatives. “Click here” “Enter” “Press Ctrl-D.” An ordered presentation with some sort of logical structure would be nice, too. Centered text all the way through screams “amateur” to me. It screams: “this page is simply a bunch of links. There is no information on this page, because if there were, it would be organized into table, paragraphs, and lists. Hence, you might as well leave this page. Nothing worthwhile here.” Finally, several extra banner ads at the bottom of the page ... and I mean way down there ... add to the lame-o/quotient of this page. I do not claim to be an expert web-page designer. Far from it. Yet, I do think I know how to organize content and present it in a clear, and not-too-harsh fashion.

On another topic, I wonder how far back the tradition of insulting people by comparing them to the mentally handicapped goes? After all, I started out this section by dedicating it to the morons and brainless losers who signed my guestbook. Moron, idiot, and imbecille all being terms for people with IQs within certain (low) ranges. Rather lame insults on my part, I admit. Shakespeare wrote much better insults.

Anyway, there are/were some other alternative names for this page, some of which may be used for other pages: vim and vitriol, dyspeptic diatribes, pithy prounouncements, annoying axioms, semi-serious sententiousness, and tendentious tirades.

Metallica: A nice strong Metallica evening ... and I didn't even have to put a CD in ... JJO is (was) playing the results of their “Solid Rock Poll” ... a list of the “top 100 solid rock songs” ... “One” is playing now. “Master of Puppets,” “Fade to Black,” “Enter Sandman,” “The Unforgiven,” “The Unforgiven II” and “For Whom the Bell Tolls” showed up earlier (in the lower half of the count; I don't know about entries 40–100). So, “One” won. Turned the bass up. Sorry about the neightbor, John—he can't stand music, period. He used to always knock on my door—“Could you please turn it down?” Well, tonight it's just too bad ... time to turn up the volume a bit.

I can understand and deal with people complaining if my music is too loud, or played loudly at the wrong time of day. But, frankly, that ain't the case here. My music is never loud, it is mostly classical, and I haven't even had the bass boost on for months. My speakers are away from the wall, etc. And still he finds reasons to knock on my door. One night several weeks ago there was a light knock, I answered from my computer “yeah?” and the response was “Steve, we need to talk.” His brother (a doctor) was visiting, had arrived that morning, was tired, blah blah blah. My lease prohibits excessive noise. Music played quietly is not “noise,” even if the walls are so thin that he can hear it to some extent. John would probably complain if I had a friend over and we talked in anything more than a whisper. He is obviously someone who never listens to music and leads an even more secluded life than I do. He leased the smallest room in the hall (maybe in the complex ...)—it really isn't much bigger than my dorm room in Marburg.

So, in any case—sorry John. It's Metallica time.

Election 98: (before election results come/came in) I voted. My conscience is clear. I even recognized many of the names on the ballot and voted not just because I wanted to vote against some moron (that was, of course, a factor), but also because I was interested in certain candidates winning.

Let me say: Wisconsin rocks. It rocks because you can register to vote the day of the election. And for someone who does not live “too” close to a place where I can register, and who didn't have enough time (once he had decided he was indeed going to vote in Wisconsin) to register-by-mail, this is a very voter-friendly measure. Plus, I got to vote on-campus (in the union), so it was quite convenient. Convenience isn't the only reason I voted—the previous times I've voted, I had to vote via absentee ballot because I was voting on the Idaho ballot from California (college and all). In any case, the situation here was very nice. I just showed them a piece of “official” mail (my bank statement in this case) and filled out a form. Then, off to vote. (Just in case, I took several “official” pieces of mail, as well as several photo-IDs, including my passport...)

Also, let me complain a bit. This year was a very dirty election year. I heard almost NO positive ads except around the time of the primaries, and in that case, only for Tammy Baldwin—such ads spoke about issues that were important to her, etc.—her adversary was not mentioned at all, nor was the “other” party. As things went on, though, it became “so and so wants criminals to sodomize your children,” “so and so wants to take all your money away,” “so and so is going to cut down every tree in the country,” etc. Finally, so-called soft-money ads and such started to show up. For example: the NRA. These NRA ads were popping up nation-wide—same ad, but tailored for each candidate. Even worse, and even more brain-dead, were ads from those non-thinking, anti-democratic freaks trying to push term-limits. They argue, the only way to return government to the people is by kicking politicians out after so many terms. Bullshit. You remove them from office by voting them out. If you don't succeed in ousting them, that's called the democratic process—you lost. Besides, it does support the view well, they'll be out in a few years anyway due to term limits ... so why should I vote now? Sure, if we can't solve something democratically, let's just build some undemocratic and unnecessary institutional structure to take care of it for us. As with NRA people, I never have and never will have any respect for the views of supporters of term limits.