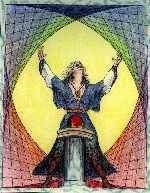 Way back when ...: meaning, several years ago, when Clinton was president (you know, when the country was outraged he would lie about fellatio ... in contrast to spring, 2003, when no one seems to care when Emperor George “Please put me out of my misery because I’m So Fucking Stupid” Bush Jr. and John “I lost to a dead man” Ashcroft lie day-in and day-out about our so-called War on Terrorism, but I digress) I put together a page I titled “The Good, the Bad, and the Ugly”. Since then I’ve bought the movie on DVD, and many people/groups on that list are no longer relevant (the Kelly Family, anyone?); therefore, I’ve decided to retire that page. I never got around to keeping it up-to-date anyway. However, rather than let it disappear completely, I am posting its contents to this page. Therefore, let the following be considered as what I considered what was right and what was wrong with American so-called “culture” (popular, political, and otherwise) in the late 1990s.

The Good:
Organizations or People who—in my opinion—are making (have made) a positive contribution, or are simply cool for one reason or another
The Bad:
Oganizations or People who, for one reason or another, exert (have exerted) a negative influence upon our world.
The Ugly:
Any combination of the following: screw-ups, morons, fools, clueless, spreaders of bad taste.

Sweet dreams are made of these: Old things, kept in files, folders, under couches, in boxes in closets, at the back of cupboards, behind tools and other junk in garages—it almost sounds like what little boys are made of. Every so often the rebel in me does not take to the street, but instead takes the pack-rat in me to task and goes about the task of clearing out old computer files. Today, a day when I should be doing other things, is exactly such a day for the rebel to wield his scythe.

A year ago I created a slender volume of my prose, poetry, and translations as a birthday gift for a friend; the LaTeX files I used for that project are stilling hanging around on my hard drive. Or rather: they were. The only thing I am not trashing is the style file I created to take care of the specific modications to the standard LaTex book format that I needed: 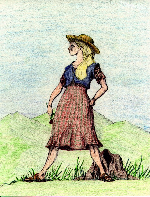 That particular project won’t be repeated, and I have both the mastercopy (print) and two extra completed print versions of the “book.” At this point I still need to go through several directories of old academic papers and convert the papers to a more text-friendly mode (that is, many of them are saved as *.doc files from way back when); the day ASCII text can no longer be read is the day millions or billions of citizens cry out in terror because their computers are useless. That day may come, but when it does, the ability (or inability) to read my old texts will be of minor concern. As stated elsewhere on this site, I first started moving things to HTML in the mid-late 90s; a more generalized markup language would be a better choice, except HTML is sufficient for most of my needs, and it can be converted (with little effort) to other text-formats. For professional quality output I prefer LaTeX, output to PostScript or PDF.

In addition I have various old archived emails and the like; some I have kept around because they have a single piece of information I want to remember; of course, I should make note of that piece of information, and then delete the rest of the text. I, however, am not so sensible a person. However, I will post one such text here—then I can delete the local copy. 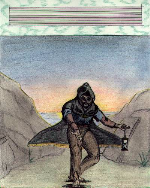 as I told you en passant, there is some information abbout activities RE: deutschsprachige Literatur aus Osteuropa in: Fachdienst Germanistik, 16. Jahrgang (1998), Nr. 9, S. 13f. You will find this hardly known (but very useful!) periodical in the periodicals reading room in Memorial Library on the second floor (in alphabetical order under “F”).

Hope that is interesting to you.

I am also sharing this message with you, dear reader, because it could very well prove useful to your own research (if you are interested in German-language literature from eastern Europe).

I have a note in another text file that I should read Stephen Vincent Benét’s short story “By the Waters of Babylon”—I must have picked up that piece of information at /. or K5 some time ago. I still haven’t read it.