My favorite bunch of “super heroes” remains the X-Men, in whatever configuration they are presented, be it the Uncanny X-Men, the New X-Men, the New Mutants, X-Factor, X-Force ... and so on ...

In the early to mid 90s I was a great fan of the X-Men animated series on Fox; every Saturday morning during my freshman and sophomore years in college I would do my best to be the first one in the television lounge so that I could claim ownership of the TV and watch my beloved cartoons. A pleasant side effect was that I got to watch The Tick as well. The cartoon series ran for five seasons (92–97), and I basically missed most of the fourth and fifth seasons because of my semesters abroad in Hungary and Germany (plus mediocre television access my senior year). Somewhere along the line I caught the "Proteus" 2-parter from season four as a re-run. 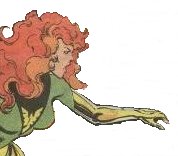 The strength of the cartoon was that it focused on a number of central and well-known characters from the comics but also took time for cameos; it also had decent characterization, several long and rewarding story arcs, and a fair amount of action, along with occasionally witty dialogue. The animation was rich, but not in the over-saturated manner of later cartoons from the 90s. It did not tend toward the abstracted and manneristic style adopted by Batman: The Animated Series (which I also loved ... it was nicely dark), and while the style was generally “realistic” (if one does not count typical Marvel super-hero body proportions as unrealistic), it was of a much higher quality than old Hanna-Barbera products like the original Johnny Quest. Some people prefer the exaggerated style of the newer X-Men: Evolution series ... I haven’t yet become a fan.

The amazing plethora of X-Men comics is, however, astounding and confusing. My freshman year in college someone from down the hall gave me her copy of Uncanny X-Men #300; during my semester in Budapest I picked up a few older X-Men issues in Hungarian (I’ve never gotten around to translating them). A few weeks ago I remarked to a colleague that I would love to get hold of all the old comics, or, barring that, see some nice anthologies released that presented a concise yet comprehensive summary to the X-Men universe(s) ... for although I love the two movies and the animated series, I am aware of how much they necessarily altered and left out.

Plus some superheroes
by Mike Miller

I did the requisite googling and discovered the FAQ to rec.arts.comics.marvel.xbooks—instead of doing my grading one evening, I read that rather long document instead. Mutatis Mutandis offers an extensive collection of documents relating to the Marvel Universe, but the site design is cluttered and an example of why frames in HTML are evil. If one is only interested in the characters and not the story arcs, one might instead consult Children of the Atom. The long and the short of it is, though, that my dream is at best a fool’s quest: the world of the X-Men is so complex and convoluted that the only way to truly appreciate it would be to read all the comics, and while a certain totality might be achieved that way, the amount that would have to be read is so tremendous that unity would still slip from one’s grasp.

The mess that is the world of the X-Men owes its nearly incomprehensible nature to several forces that can all be traced back to the fact that the X-Men do not simply “exist”—rather they are the creation of generations of artists and writers at Marvel, a company that has made questionable management decisions in the past (and will continue to do so, I suspect). Thus the first X-Men series was cancelled after a brief run and revived only years later, with the original issues re-issued; then some characters were killed; a series with a new name was created; characters were shifted from series to series; more series and characters were created, killed, and revived; artistic talents came and went; and then a great mass of cross-over story-lines were introduced. This is the simple version. (Aside: sure, Marvel published and continues to publish a bunch of anthology paperbacks for a bunch of comics, but these “essential” collections are just a sort of “best of”—and you are always left wondering, what got left out? and was it important?) In the meantime, a number of memorable story-arcs made such an impression that they have become what, to many people, the X-Men are “about” (e.g. the Phoenix and Dark Phoenix Sagas and the early Xavier + his X-Men versus Magneto theme).

Back to my own story: I wanted a concise and comprehensive overview so I could answer questions such as “What’s up with this Madeline Pryor person?” Reading the FAQs and fan pages only makes it clear that any short, concise answer promises to be unsatisfactory ... as stated, the necessary task is to read everything, an impossible task, actually, as I do not have said comics, nor do I have the time, money, or motivation to collect them. The desire to do so speaks to a rationalizing urge, a drive to neatly categorize, organize, and deal with something rather open-ended. The task is much more easily accomplished with the animated series, for example: there were five seasons, there is a relatively fixed episode order (“No Mutant is an Island” belongs in season three in terms of the story but is in season five due to production reasons ... but there are a manageable number of such problems) ... one can simply collect all 76 episodes and be done with it.

It is here that a nice issue of hermeneutics and myth arises, one discussed this summer in Marbach by Jean Bollack. Where, one might ask, is the myth situated? Are the plays of Sophocles the myth? Or is it that the myth and the mythical slip from our grasp as soon as we discuss such a text, because such a text is already an attempt to come to terms with the myth, and is not the myth itself. Such an approach basically closes off (ancient) “myths” from our inquiring eyes ... some might see this as liberating, others as frustrating. The text-oriented scholar will, however, point out that this is just a way to say that what we are dealing with is a phenomenon, our interaction and interpretation of a text or corpus of texts (no matter how complex their relationships might be), and not something “represented by” these texts.

These thoughts came back to me when considering the various incarnations, if I may use the term, of the X-Men and other Marvel mutants. As with Star Wars, Star Trek, Tolkien, and many other contemporary works of fantastic fiction that can be described as “epic” due to their scope, the Marvel Universe wrestles with the question of which works that are considered canon and which are not. And regarding the animated series, as mentioned above, what it offers is a compact, neatly wrapped package. It is the type of thing I might refer to when trying to “explain” the X-Men. In such a case I am less interested in narrating the cartoons themselves ... rather, they seem to exist as snippets of thread from a larger tapestry.

In any case, as with many other 80s and early 90s cartoons, it would be nice if a single distributor had the rights to these shows, could transfer them to DVD, and would sell them as reasonably-priced “Season 1,” “Season 2,” etc. sets.