Blast From the Past #2

At one point I put my webpages on a GeoCities account. The reasoning was as follows: I needed a more or less ‘permanent’ URL, I had recently lost my Pomona account (since I had graduated) and I did not yet have one at UW-Madison (a situation that was quickly remedied. I did not work in the tech industry, was a poor graduate student, and so had to settle for what later became one of the crappiest services available. If this sounds like some sort of “apology”—it sort of is.

I still have several old GeoCities accounts ... they tend to point here, and none of them really have any content (except for one that I do not wish to have associated with my name at this point). Back to my narrative—as an incentive of sorts (and a way to show off cool stuff and get people, whose computers were too slow, to upgrade) they provided several java (cr)applets, especially the type one could use for slideshows and the such. Perhaps the most famous of which is Intel's classic 3DPhotoCube. I set up one such cube (each photo 200x200) ... later it got taken down, along with the rest of that site, but I still have the images, and I figured I might put them together into a sort of short slideshow. 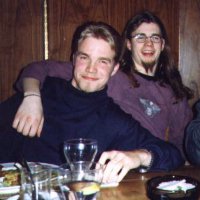 Adrian Popp and Rene Gau, December of 1995 in Gifhorn (during my last visit there ... I was on break after my semester in Budapest and so I returned to Gifhorn to spend the holidays with my old host family).

It still astrounds me at times how powerful the memories can be that are invoked by the sight of a mere photograph. I do not spend my days thinking about events from the past, but such pictures erase the gap in years ... but it is images of people, not things, that have that magic for me. Expressions are palimpsests; face balls of yarn to be unraveled.