That having been said, it’s a very satisfying pony, or very satisfying one-trick ... you decide ... and before going too much further, it’s something I wish to describe in greater detail.

In almost every episode a fight scene arives, and when it does the show kicks into high gear. The three “sisters” fly into action (in Anita’s case, usually quite literally), paper is flung through the air, and the exciting theme music rushes on stage. Each fight scene, each episode, the music is the same, and it lasts only as long as the brief fight scene; when another fight scene comes on stage, the music is revived. And for this critical viewer, it works every time; that music is a drug: my heart races, my senses tingle, and the hair on my arms and neck stands at attention.

R.O.D. - the TV is divided into 26 episodes, and one can divide those 26 episodes into 2 13-episode ‘seasons’ insofar as plot and development are concerned. The first season, as I will call it, alternates between adventure episodes and domestic episodes; the former tend to send the three sisters (Michelle, Maggie, and Anita) on some quest (usually to recover an important book), whereas the latter often revolve around the sisters’ relationship(s) with one another and with the Japanese author Nenene Sumiregawa or concern themselves with, Anita’s life at school.

The sisters are introduced to Nenene Sumiregawa in the first episode, in which they become her security detail during a book tour in Hong Kong, though matters are quickly complicated by attempts on Nenene’s life. The “domestic” theme is also introduced in this episode as the sisters’ spartan yet chaotic, book-centric lifestyle intrudes upon Nenene’s more controlled personality. When Nenene’s life is threatened by a madman with a bomb, Maggie, Michelle and Anita come to the rescue, demonstrating their paper-wielding skills (and bringing about the first exciting instance of the theme music [see above]), which causes Nenene to ask them if they know Yomiko Readman (“The Paper”), a friend of hers who has gone missing, and the paper-using star of the R.O.D. OAV.

After the sisters follow Nenene back to Japan they are employed by her agent, Mr. Lee, to act as bodyguards, but soon they move in with their charge, throwing Nenene’s life into chaos and furthering the “domestic” plotline. Questions, however, remain unanswered: where did the sisters get their paper-using skills, what happened to Yomiko, who is the blue-haired boy “Junior,” why are the sisters sent after a series of mysterious books, and what is the true relationship between these three “sisters”?

Matters come to a head at the end of the first season when the series, which started in Hong Kong, brings the principles back to that city. Much mayhem, destruction, and fighting ensues ... plenty of opportunity for the theme music ... and at the end Hong Kong is just another Venice, sinking into the sea.

The loosely-connected, serial nature of the first season is transformed into a tightly-woven, goal-oriented second season. Gone are the domestic episodes, and whereas the first covered a whole year in Japan, the second focuses on a much shorter span of time, though our globe-trotting heroines are now constantly on the run and sent from Japan to England. All the questions posed in the first season are addressed, but Yomiko’s inevitable return complicates rather than simplifies matters.

As with many sci-fi and fantasy-oriented anime series, what begins as mundane often takes a mystical, surreal, or allegorical turn toward the end—one only needs to recall the utter bizarreness that is the end of NGE or SE: Lain; here the seeming benevolence of the British Library in the OAV takes a sinister turn as attempts are made to return the British Empire to greatness and to impose peace, harmony, and universal enlightenment upon the world’s population. That is to say, like NGE and SE: Lain, R.O.D. - the TV expresses a theme common to a great deal of Japanese anime: issues of authority, militarism (all less so in SE: Lain), secret societies (often tied up with matters of authority and control), apocalypse, and transhumanism. 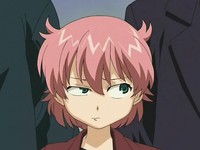 Some fans of the OAV, which was fast-paced as well as high on intensity and low on character development, have expressed disappointment with the TV series, and from what I can tell this disappointment focuses on two matters: the relatively slow nature of the series (especially the first season) and the absense of Yomiko “The Paper” Readman (also a matter of the first season). The reintroduction of Yomiko, however, provided interesting twists, and the TV series itself casts the OAV in a completely different light, though many of these new perspectives are hinted at in the OAV (such as Joker’s controlling nature and Wendy’s admiration for Joker); only one matter struck me as very curious, and that was the radical change in Nancy’s (“Ms. Deep”) personality, though the end of the OAV provides insights. Yomiko’s cutely naive outlook is shown to be just naive, and the ethical concerns her behavior raises swing between melodrama and depth.

A few others have commented upon the animation quality. There is great character continuity between the OAV and the TV series (though Nancy goes from overly-endowed secret agent to a dumpy wearer of overalls), but the overall attention to detail is not as great. One must contrast it with the fluid, highly-detailed and polished world of the OAV, with its slick James Bondesque opening sequence.

That having been said, R.O.D. the TV is satisfying. The theme music, adapted from the OAV, evokes James Bond, Mission: Impossible, and Charlie’s Angels all at once. Sometimes you don’t get tired of watching a pony perform the same trick over and over.