Oatmeal, tea, milk. Day in, day out. Except when it’s time for eggs. One or two. Sunny-side-up or over-easy or scrambled or as an omelette with peppers, cheese, and turkey or ham. Limited variations on a theme.

There is a type of strength in such a theme and variations. Consistency, predictability, and yet the freedom that habit can provide. But habits are only a means to an end; I’d rather avoid The Routine. It’s that whole static-vs-dynamic structure—necessary and therefore a given rather than a conclusion. 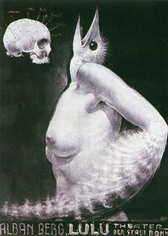 No one could accuse Wedekind of excessive prudishness; I find the poem’s decadence refreshing. Read outloud it is even more forceful; the verbs are active, concrete, and even imperative (e.g. “Greife,” “Meide,” “nimm”). Transgression—be it sin, the nature of law(s), or sacrilege—is the theme in all three stanzas. Such are the types of poems we love and love to teach, though whenever attempts at realization are undertaken, we respond that we can’t ignore the “harsh realities” of life and how the world “really works”—it is both amusing and distressing how reality is used as an argument against realization.

So the chai is steeped (in tradition or otherwise). At least two or three cups of tea a day, be it black, green, or herbal, high-octane or de-caf (“What do you call a postpartum cow? Decalfinated ...”). Always for breakfast, but then throughout the day, at least once in the afternoon and once at night. The Lapsang Souchong has been consumed recently, but I enjoyed a nice “vanilla almond” black tea at the Sunroom Cafe yesterday evening. While I love tea, I find that with too many of them the aroma is the taste; perhaps I just need better tea(s).

Mix butter, cocoa, salt and sugar over low heat in a pan until smooth. Stir in vanilla. Add to eggs in a large bowl. Stir in flour and other ingredients. Beat for about 40 strokes with a spoon or rubber spatula. Bake at 325(F) in an 8x8 pan for about 20–25 minutes. The finished brownies are dense, thin, and very rich.

Sebastien provided me with the seed of my own destruction when he made Interlude and other OVAs and series available to me. Interlude was just that, a short break; at only 3 episodes in length it was a mere distraction. Alas, it didn’t stay with me as some shows do. It was, however, a thoughtful set piece.

The 13 episodes of Elfen Lied provided another brief distraction. The show contrasts extreme and graphic violence with domestic scenes and borderline fanservice. In some regards it was a mini-Evangelion; action plot, pseudo-sci-fi underpinnings, and the psychological trauma of the main character(s), though admittedly there the similarities mostly end (unless one includes father figures of questionable ethics, the “evolution” of humanity, and the contrast of/between technocratic seriousness and domestic silliness). Although it might seem a bit strange, what interested me in the show was the bizarre Klimt-inspired opening sequence that merged Jugendstil (specifically Klimt’s “The Kiss”) and somewhat cartoonish and typical anime figures.

It comes as no surprise that shows such as Elfen Lied and Neon Genesis Evangelion merge sci-fi, ethical considerations, and pyschological (family) issues the way that they do, for after all the teenage and young adult male is their intended viewer. That having been said, it would be nice to see the whiny emo-isms dropped in favor of something less angsty. Replace Klimt with Wedekind, for example.