I had the joy of visiting the doctor today; I also visited the writing center for the first time in my life, but for a reason unrelated to the writing of my dissertation. Sometime between these two activities I managed to teach and chat with colleauges. And this evening I even found time for a movie.

The mystery of the exploding German toads has not been solved but news of it has spread everywhere. They are not quite as amusing or interesting as the famous Minnesota mutant frogs of the 1990s.

The advantage of not drinking very often is that while a single drink (or even two!) will not raise your blood alcohol level above the legal limit (unless your legal limit is almost negative), it can make you a bit silly or light-headed. All praise the Dude and his drink of choice.

Last October I received the following phishmail; its absurdity was clear from the get-go, for unlike the well-known CitiBank phishers, this one was so full errors that one could not help but chuckle in snide satisfaction and amusement.

We must check that your Yahoo! ID was registered by real people. So, to help Yahoo! prevent automated registrations, please click on this link and complete code verification process:
ww௦w‎.y޳a޵h޺o‏o޵.޸c޺o޶m޴/? mT0NaqmOORX8fHJC0XTNdil0wm6i0sRzMyjmCHGrFSrYluxvy007x

The latter belong to a broad category of verbs called causatives; the pairs of active-causative verbs as a phonologically/morphologically-related category is so old that these verbs are common to both English and German. In the seventh grade Mrs. Mikkelson instructed us—during our dual reading and composition hours—on the proper use of lay-lie, set-sit, and others that still cause native speakers of English a multitude of problems. I could never master them. That is not quite true—I never tried. Years later, however, the German causatives helped me to distinguish and identify their English congates (Latin, born with). Through the proper use of sitzen-setzen; liegen-legen, and others I am able to tell sit-set and lie-lay apart. 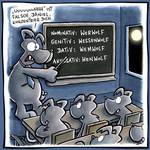 German teachers and students encounter these verbs when learning two-way prepositions, those prepositions that can take either the accusative or dative case, depending on the nature of the verb—action or state. Verbs of state, such as liegen, sitzen, and stehen, take the dative and answer the question wo? (where?), whereas verbs of change, such as legen, setzen, an stellen, take the accusative and answer the question wohin? (where to?). The answer to the third question—woher? (where from?)—includes the dative prepostion aus and takes the dative. The verbs of state are the older verbs; the proof of this employs a bit a simple deductive reasoning: strong (vowel changing) verbs are older than weak (taking a t in the participle and preterite) verbs, and the verbs of state are all strong, while all the related verbs of change are weak—thus, the verbs of state came first. State and action, however, are not the real cause for differentiation, for we call them causative verbs for a reason; the verbs of state are intransitive, whereas the the verbs of change are transitive (they take direct objects—a subject does the action to an object).

Students of German have various problems with such groups of verbs; it is not helped by the fact that most cannot use the analogous English verbs in the prescribed manner.

Strong verbs, such as lie, sit, and fall, all have vowel changes between the forms of the present, past, and past participle:

A similar progression exists with the German verbs:

While in its development English maintained some of the vowel changes it acquired from its Germanic roots, it at the same time lost many other morphological features, and thus, while the preterite of liegen is lag and contrasts rather strongly with the weak verb legen, the English past tense lay is identical to some forms of the weak verb lay. It is not surprising that some confusion arises in telling these types of verbs apart in English.

The weak causative verbs are clearly derived from their strong parents and are, in addition, related semantically, and since such systematic and wide-ranging changes rarely occur (and persist!) without some perceived reason or benefit, we can conclude that they served a purpose, especially one in a family of languages that was much more synthetic and dependent on (and responsive to?) morphology than the more analytic modern English and German. Perhap, then, it is not surprising that the lines between members of these pairs is blurring in standard English usage; I am not sure of any trends in German.

Compare/contrast, for example, the following expresions:

In English it is common to use traditionally active verbs as causatives, whereas the German expression—‘Set yourself down!’—employs the reflexive pronoun so as to provide a direct object for the causative weak verb. Language change, however, is often messy. If the active verb is an action or state, and the causative means to cause the action or state, then one need not be limited to the strong-weak pairs discussed here. Causatives can be formed from nouns and adjectives, as well, and over time many strong-weak pairs have either merged, fought it out so that only one remains, or gone their separate ways.

While researching a few other movies I had either seen or wanted to see I came across Sondra’s Lair, a wonderful repository of film recommendations and commentary ... at least for me, for it seems that her taste in films overlaps with mine to a great extent. I saw Oldboy in one of her lists and I decided to head over to 4-Star to pick up a DVD or two (or three or four) for the weekend. I got Election and Very Bad Things, both of which I had placed on a watch-when-in-the-mood-for-black-comedy list ... I was in such a mood. After watching The Dreamers a few months ago I came to realize that Stealing Beauty was a Bertolucci film, so inspite of Liv Tyler’s presense I decided to watch it. I suppose my dislike, or at least apathy, regarding Ms. Tyler stemmed from such piles of shit as Armageddon ... and I cannot say that she was the strongest part of Peter Jackson’ Lord of the Rings adaptation(s).

Stealing Beauty was a pleasant surprise. Most of the performances were strong; Liv Tyler held her own, I felt. Viewed alongside The Dreamers it comes across as more than a simple (or simplistic) coming-of-age tale. While Liv’s tale is indeed such—losing her innocence, learning her history, and dealing with death—the broader context is change and the fragility of utopias or refuges. While some have described the film’s narrative as excessively lethargic I find that the leisurely pace of the film allows for a greater sublty than a more plot-driven script would have allowed. It is a beautiful film, full of complicated and conflicted characters, and somehow humane. It deserves a second viewing.

Because Oldboy was only available as a region 3 DVD I instead picked up 301/302, a surprisingly pleasant Korean film. It has been considered a mystery, thriller, and horror film, and those approaching it as such and expecting the twists, turns, thrills, and chills associated with the named genres will be (and have been) disappointed. The movie is weird and at times disturbing. There is a detective/investigator and a missing woman. Plenty of blood is spilled and numerous knives slice and dice. 301/302, however, is a drama that focuses on the histories and relationships of two women—two neighbors—and their conflicting and conflicted relationships to food, sex, and societal roles.

Simple allegories often disappoint in their didacticism. Far-flung metaphors fail to convince while the more simplistic are too trite or even so common as to be mistaken for the thing itself. Many a symbol has wandered astray to the realm of extreme abstraction or heavy-handed obviousness. Somehow in 301/302 the food-sex relationship navigated a space between these extremes, and while not exactly fresh, it was refreshing and provoking.

Often when I watch a movie or television show I find myself struggling to find the aesthetic; the semiotic is all around. Boundless objects and occurances are mere instances of playful referentiality; in the most formulaic not even a clever twist can serve to make them appear anything other than part of a standard repertoire. In 301/302 the semiotic level was in evidence, but the rectangular order and verticality of 302’s apartment and angular features contrasted with 301’s roundness and color without merely signifying. Fluffy did not walk on screen every five seconds to remind us of her existence. Sometimes a knife was just a knife.