As those who know me can attest, I'm not a huge football fan, but I enough to make myself dangerous, primarily because I have a good memory and remember those things I see or read or hear. I did not watch the Fiesta Bowl, Boise State vs. Oklahoma, in its entirety. Evidently I missed one hell of a game.

I spent much of the 1st watching Buffy. From time to time I got online or turned on the TV to check the news. Along the way I heard that Wisconsin beat Arkansas (whose coach, Houston Nutt, used to be at Boise State and coached against Wisconsin in the fall of 1997, during the only Badger football game I've seen live ... a 28–24 Wisconsin win). Back to Buffy.

In the evening I logged on and saw that Boise State was leading Oklahoma, so I turned on the TV and checked it out for myself in the 3rd quarter ... just as a punt bounced off a Boise State player, giving the ball to the Sooners. I figured that BSU's lead would evaporate and they would lose, so I turned off the TV.

A Buffy episode or so later I turned the TV on again and with less than two minutes to go BSU was nursing an eight point lead; then Oklahoma scored; and after two penalties and three attempts they tied it with a two-point conversion. Once the Broncos got the ball back the QB tossed an interception that was run back for a TD. I turned off the TV for good.

Some time later my phone rang; it was my father.

He asked me whether I'd seen the game, seen Boise State win. 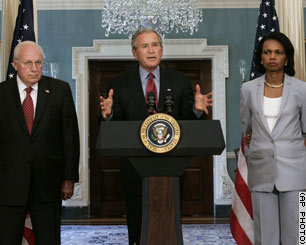 Short version: Broncos get the ball back, down 7, and drive, and with only a few seconds remaining make it into the endzone. They tie the game, they go to overtime, and after Oklahoma scores on their first play with a 25 yard Adrian Peterson run BSU gets the ball back, and almost fails again, but with a couple trick plays not only scores a TD but fools the OK defense and goes for the win with a 2-point conversion.

An earthquake is felt in Idaho as 1.5 million residents jump up and down at once in joy.