Because of the way State Street hits the Capitol Square at a corner, not a side, intersections along State Street tend to result in a lot of 45 and 135 degree corners (rather than the normal 90). What I like about the corner of State and Dayton (with Fairchild at a 90 degree angle to Dayton, and Dayton itself ending for a block) is the layering effect caused by the differing building heights. 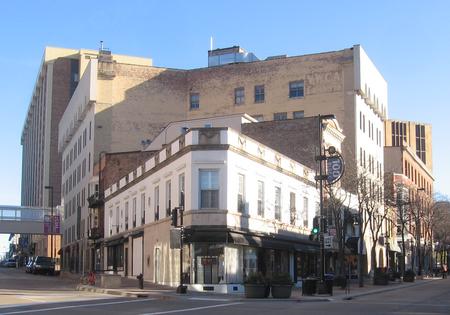 After coffee on Sunday the 24th of December Jasmine gave me a ride downtown to the library. It was not yet 9am, but the library was not open, and if it opened at all, it would not have been until 10am, as I later noticed. Instead I took a stroll up State Street, stopping for a dozen or so photos along the way, including a 360 degree panorama around Gilman (I might post those later).

State Street itself was almost deserted, all the stores were closed, and only a couple coffee shops had opened. A fellow photographer was using the occasion to capture images of an antler or horn placed strategically along the sidewalk or street. 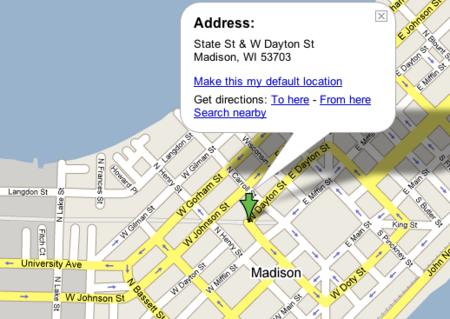 The Google Maps image provides a little context for the above photograph, showing the mess that is the Isthmus.

From the state of Wisconsin we have a crime update.

I don't know enough about the case to make much of a judgment regarding the appropriateness of the punishment. For all I know the girl is a dangerous, violent offender whose removal from society during these crucial teen years will keep the public safe. The judge had to show that the law, not just the comb, has teeth, that one can't brush this hairy matter aside.

It's not so much that I worry about the violence of today's youth (look at me ... today's youth? Who am I ... my parents?), but I do wonder about it. I'll admit to going to a rural school, another that was more rural than suburban, and one that was basically suburban—though as school shootings and such have shown us in recent years, school violence is not an urban-only phenomenon (it just took middle-class white kids dying for society at large to notice the problem). That having been said, I made it through thirteen years of public education without being involved in any fights, and I was witness to relatively few—in middle school cat fights were a spectator sport of sorts, and there were one or two guys you knew not to piss off, but that was basically a matter of reputation ... I can't actually cite any incidents.