When people talk about the United States being a young country and having a young culture (or little at all), this speaks generally to equating the two (culture and history), equating history with European history after 1492, and ignoring the ways in which culture is what you practice. The upper Midwest is full of practices not broadly at home elsewhere in the country, and the Friday fish fry is one such part of the culture.

Upon leaving Van Hise in the afternoon I walked down the hill toward Memorial Union. As was the case last week before the LUG meeting the Rathskeller was serving food, and as then they had their traditional Fish Fry on the menu, along with the standard fish & chips.

After a late lunch I headed to Fair Trade for a cup of coffee and in the process encountered Kjerstin, so after pleasant conversation I joined her and William for dinner at Husnus; it and Kabul serve as date restaurants for many undergrads, and departments organize post-conference dinners at both. What K&W and I noted was that in the course of the years we've been here, the menu items have increased perhaps a dollar in price; quite a number of items are still only $8.95 and many others only $9.95, which is not just reasonable, it's almost cheap.

Efes makes a standard pilsner as well as a darker lager, and while William had several bottles of the pilsner, which is, evidently, a standard, inoffensive lager but nothing special, I went for the dark, which was refreshing, slightly bubbly, and tasty. Again, nothing special, but a good dinner brew. 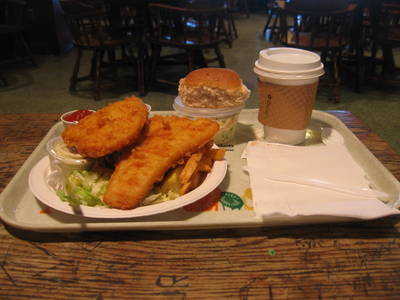 When thinking of a Friday fish fry perhaps the first thing to spring to mind would be Catholicism, yet it's worth noting that Wisconsin is not a terribly Catholic state and the fish fry is pan-ethnic and pan-religious here; associating the fish fry in Wisconsin with Catholicism is only a starting point. As Jeff Hagen states, “Wisconsin's population consists of a great number of German Catholics, and they have continued their traditions of meatless Fridays (which began with the Lenten season and seems to have spread to all Fridays for some).” But in addition location and the large amount of fish available as well as what Hagen calls the “German imbibement factor” (all taken from the same source, Tanya Gillitzer) served to cement the almost communal meal as a cultural practice common to many residents. Janet Gilmore traces it to the Ojibwa tribe, and E.E. LeMasters sees it as a beginning-of-the-weekend activity. And, as Gillitzer points out, the tradition goes back to Prohibition, tied, perhaps, to restaurants and such trying to find new ways to attract and keep customers. In short, a number of contextual, historical, and structural factors came together to create a tradition that extends beyond any sort of Catholic origin and instead is identified as local and Wisconsin.

This belief does not make the Friday fish fry a “Wisconsin Tradition” in the sense that it's a tradition or cultural practice that belongs to Wisconsin; indeed, there are fish fries elsewhere in the country, with Catholicism being one of the common historical and cultural denominators. That having been said, the Wisconsin fish fry is not just any fish fry.

Years ago Mike, Rachel, Matt and I got together at the Avenue Bar (1128 East Washington) for a Fish Fry—reservations recommended ... no ... necessary. It's consistently the most popular and highest rated of the fish fries in town.

Memorial Union, one of two campus student unions, has their own Friday fish fry, consisting of two options. One gives you three pieces of fish, the other two slightly larger beer battered pieces. With both you get a dinner roll, cole slaw, fries, and a lemon wedge. They let you exchange the included large soda for a small coffee. It's greasy fast food, but keeps with the spirit.