Rose Room, or: My Desiccated Veggies

On November 2 Lukas came to town, Jen and Christoph were unavailable, so in exchange for a place to sleep he cooked dinner. The pasta sauce he prepared included peppers, a curious, large radish, garlic, and half an onion. The next morning I went to Chicago for Jyoti, Leena, and Moritz. The other half of the onion has sat on my counter and then window sill ever since. 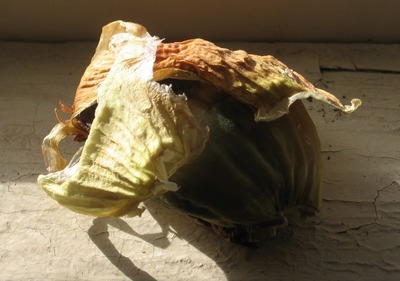 When Jyoti and Corina visited Berlin we decided to make a salad one evening and to that end gathered fresh produce from my corner market. We used half the radishes for the salad and the others, many of which appeared slightly deformed or at least not quite as savory, I set aside. When the next day or so I replanted the palm/corn/something plant in the apartment when those two were out exploring on their own I was left with a moderately sized pot full of soil. 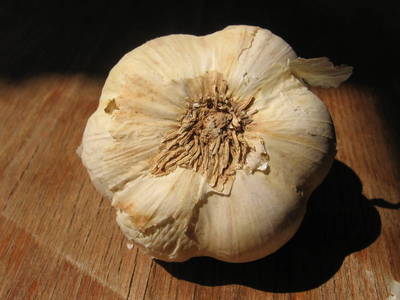 Months earlier I had picked up a bag of onions from my local SPAR, and one of the unused ones had started to sprout a green stalk A combination of boredom and curiosity led me to pot it; on May 29th I began taking daily photos of it as well as some radishes I'd planted, and at that point it was already a good six to nine inches tall. By the time I left Berlin in August the main stalk was well over a foot and a half long and had a blossom at the tip that hadn't quite broken open.

Shortly after beginning this experiment I also planted some garlic cloves to replace the radishes in the pot that had mysteriously over the course of a day or two turned to mush. Those in the glasses of water stayed fresh for two and a half months and snaked their leaves across the table. The garlic grew at a rate of nearly an inch a day until the stalk stood about eight inches high and began to droop. Eventually it withered and draped itself over the edge of the pot.

A month later I noticed that a bunch of garlic I had on a shelf had started to sprout a bit, and so on the 21st of July, given the extremely good sun I had in the kitchen that morning, I decided to take a few (or rather, few dozen) photos of the cloves. When I peeled off the skin I found a clove that had been consumed by a white mold or such, and what was left behind was brown like wood, shriveled, and hard.

My half-onion sits still upon the sill, and a dead and dried spider hid under it until I shifted the yellow, brown, and green vegetable a few inches to the right into better light.