On Saturday the 20th I headed to Jen and Christoph's place around 2:30 to (re)watch Das Leben der Anderen, and along the way I took a few photographs. Between Ingersoll and Few I saw a melting snowman; on the 24th as I walked to the co-op for some food, after more snow had fallen, he had been rebuilt, bigger, better ... the $6 million snowman?

The book, Accidental Species (Kass Fleischer, Tuscon, AZ: Chax, 2005), is pretty, with its hummingbird tied down—feet, wings, beak—upon the droplet infested red surface. It is slender, a mere 105 pages, but dense with the shrapnel of exploded and (re)compressed language.

On the day the space shuttle flew overhead, he forgot where she put the pronouns. Do you ever, she said hopefully, say what you really think, really cut yourself loot? No real man would even bother to shake his head negative at that. The problem, he said, is not in our stars, but in utera. (“Engagements” 12)

The first piece (“Engagements”) is a curious little theme and variations. Eventually the space shuttle fades, by which point, upon re-reading the first passages, you wonder whether it was ever really there to start with.

Sometimes people ask the strangest questions, such as why men wear clothes.

Not long ago I complained about the difficulty of getting corn-syrup-free Worcester(shire) sauce; even the official brand contained it, even in that paper wrapping. Yet when I went to the co-op the other night to get some water and chocolate milk I browsed the sauce aisle and discovered an “organic,” corn-syrup-free Worcestershire sauce, which, at the same time, was about the same price as Lea and Perrins. 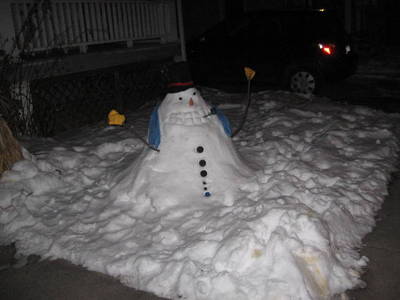 Rebuilt snowman, bigger, better, but not faster (Jan. 24)
The slut race won, they say overfled, we flew—and don't laugh, because that was not our attention. (“Dear Brother:”) propulsion aside, good docking requires a fuckload of pay-rents, for underlanding would be aborted given penetrating laser bombs. If we disintegrate, it was nonetheless the fault of youknowwho, crowing. (“Engagements” 19)