Where did all those lost animals go? CNN, perhaps, has an answer. And what about hose Lost folks on the island? Tonight we got more answers. Lost and found, question and answer, search and rescue.

As a followup of sorts to a recent German story, reported to me by my students, that of 2500 cats reported missing annually in Germany it is suspected that 500 or so are actually shipped to Poland and/or China and then exported back to Germany as parts of “coats” and the like, we have a story from CNN reporting that ‘Faux fur’ is often dog hair: “Many fur or fur-trimmed jackets sold in the United States as having ‘faux fur’—or not labeled at all—are actually made, at least in part, from dog fur, the Humane Society of the United States said at a Capitol Hill news conference Wednesday.” 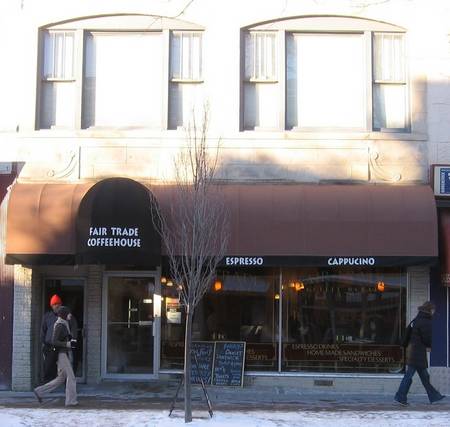 After teaching and related activities I finally left the department—as usual, later than desired or expected—and eventually made it to Fair Trade for a tall dark roast for $1.90, change in the jar. I had done my good-deed-of-the-day by trying to pass on the goodness that is the Sunroom Café (and the historically related Sunprint) to colleagues. Angela and I also had a brief discussion about the various State Street coffees, both agreeing that Steep & Brew provides our favorites; on top of that they have the best tea selection. Where they lose ground is with regard to the mediocre pastry selection. It's not that it's bad, merely that it cannot compete with Michelangelo's or Fair Trade (same pastry source). Espresso Royale has mostly bars. Both S&B and FT feature chatty baristas, but the former is a bit smaller and rarely feels as crowded. There are, however, many more electrical outlets at FT and it's been my coffeehouse of choice this year.

“Do you feel like hooking up with anyone else?”
“I could, but I don't feel like it. Did I tell you I used to like my old boss?”
“I don't know. Where did you used to work?”
“Brats, the restaurant? I flew out to Palo Alto over spring break. San Francisco. I was visiting a girl friend at school. And we went to his place at Tahoe.”
...
“Where does he live?”
“Tahoe.”
...
“My birthday is in two Tuesdays.”
...
“I have like so many more questions.”

At that point the likes-per-minute (at one point I counted six within ten to fifteen seconds) became too high for me to concentrate on the meaningless boy-obsession conversation itself.

Fair Trade does, you see, have superior or at least more numerous conversations, and, as with people who have begun to treat their cell phone talks as speaking engagements for all on the bus or in line at the grocery store to hear, at Fair Trade one is often witness to the most private matters made public. Fair Trade's other feature is that it is quite often the location of choice for first-time-coffee-dates. The two women next to me today were not on a date, but they had not talked all semester or longer, and were in the process of catching up.

More painful, though, was the matter of a mother and daughter at the back of the bus on my ride home. It was moderately-educated middle-class information overload. What I could tell was that the mother had five children, the oldest around 24, and the daughter with her on the bus being the youngest, and likely in high school, for she (the daughter) had algebra and economics, the latter of which makes the mother's head hurt—bring home a paycheck, deposit it, save 15%, and go from there, that's enough for her. They refused to shut up, and I cannot tell (as I did not turn around to look at them) whether they were performing for the rest of us or whether they were merely clueless of their surroundings. The problem with the authenticity of the dialog was that it felt like characterization and exposition put into the mouths of “characters.” I was in a suburban Ayn Rand novel.

The daughter evidently did quite well at French, but when she decided to quiz her mother not only did the mother fail, but the daughter's mastery of the language was limited to 2nd year high school level. Evidently her father speaks many languages (French, Dutch, German, Portuguese ... and some others!) but if his knowledge is anything like his daughter's (given the definition of to know being employed by these two), I suspect he knows a few phrases here and there. He is, however, the most intelligent man the mother knows. He has an M.A.

Evidently the daughter had been surprised and disappointed when upon asking a teacher point-blank in class whether she (the teacher) had ever prepared her own lesson plan from scratch (rather than teaching straight from the book) during her career the teacher refused to answer, and only agreed to talk about the matter after class. The mother was proud of her daughter, and then prided herself that she and the father had decided that they would always answer any question asked by their child, and if they felt the child was not yet ready for such information, they would tell her (the daughter) so and provide the answer when she was old enough. An open family that values inquiry, you see.

It was about this point and a result of this inquisitiveness that the mother pointed out that they had always answered and been able to answer their daughter, though the girl felt—with regard to alebra, for example—that she was finally moving beyond her mother's knowledge. “That's what your father is for,” she replied. And from here to economics, French, other languages, the wonderful foreign people the mother and her earlier husbands knew in Spain and France—she (the mother) really needs to get back to reading some French novels to improve her language skills—and finally my stop arrived, I got off, and my head ceased its pounding.

My only Lost comment is that the increased focus on The Others has finally shifted into full gear, for now the flashback stories involve them in the same way that we've learned Jack's backstory, learned about Hurley's lottery winnings, and about Locke's daddy issues. Tonight we got ex-husband issues, family matters, and a death straight out Final Destination 2.