There is no Point in Trying to Pretend

Comics and music and books and pie, oh my. Anna Nicole Smith, age 39, died today. An autopsy will be performed; she at least outlived the son of her ex-husband, whom she battled for a dozen years in an inheritance lawsuit. How petty is life, how petty are the people who live it. A handful of unrelated things follow.

I started re-reading Marvel's Annihilation event, which started last spring and just finished (a Prelude, 4 4-part mini-series, and one 6-part series); when it began I read the first issue or two of each mini-series as well as the prequel. I figure I'll read the whole thing and give it a fitting mini-review.

I'm still awaiting the final Civil War comic so I can get that “event” behind me. In and of itself it's written well enough, but it's not a story-telling event; it's a marketing event, and everyone knows that. It's the type of thing that works if if is limited to the summer (a true cross-over, 3 months, max) or is just produced as a separate graphic novel. But it has taken up half a year or more of some titles (either directly or through delays), and other titles knew just to ignore it. It's not much of a world-altering event when it does not even play out in the pages of Astonishing X-Men, X-Men, and Uncanny X-Men. It has been turned into Iron Man vs. Captain America, with comic-less Sentry on the sidelines thinking “Should I do anything?” and Mr. I have too many books Peter Parker switching sides. Whine whine. That leaves the Fantastic Four. I don't know—I haven't read those yet—but judging from the main Civil War books it's clear that Reed's a f**king autistic antisocial putz, a brain with the social skills and morals of a retarded Neo-Con.

The strength of the Civil War event must surely be the cover design, and at least Nextwave had some fun with that.

While at the laundromat and then later in the day on the bus to and from Woodman's I read a few chapters in Somthing Rotten. I should just sit down and finish it, but given other activities and obligations I have not had the time, or at least not a single uninterrupted block of time.

This evening I finished F with Fury in the Slaughterhouse, which led me to G, which begins with Garbage and then Genesis.

Do you like Phil Collins? I've been a big Genesis fan ever since the release of their 1983 album, Genesis. Before that, I really didn't understand any of their work. Too artsy, too intellectual. It was on Genesis where, uh, Phil Collins' presence became more apparent. I think That's All was the group's undisputed masterpiece. It's an epic meditation on doubt. At the same time, it deepens and enriches the meaning of the preceding albums. Listen to the brilliant ensemble playing of Banks, Collins and Rutherford. You can practically hear every nuance of every instrument. In terms of lyrical craftsmanship, the sheer songwriting, this album hits a new peak of professionalism. Take the lyrics to Silver Rainbow. In this song, Phil Collins addresses the problems of the abusive transit authority. Illegal Alien is the most moving pop song of the 1980s, about citizenship and immigration. The song is extremely uplifting. Their lyrics are as positive and affirmative as, uh, anything I've heard in rock. Phil Collins' solo career seems to be more commercial and therefore more satisfying, in a narrower way. Especially songs like In the Air Tonight and, uh, Against All Odds. But I also think Phil Collins works best within the confines of the group, than as a solo artist, and I stress the word artist. This is Home by the Sea, a great, great song, a personal favorite.

Sift flour and salt together. With a pastry blender, cut in 1/2 the shortening until the mixture has the conistency of corn meal. Cut in the remaining shortening until the grain in it is the size of small peas. Sprinkle 1 tablespoon water over part of the mixture. Gently toss with fork. Push to side of bowl. Repeat until all is moistened. Form into a ball.

Divide in two, one for the top crust, one for the bottom. Roll out on a lightly floured surface. Wax paper works well. 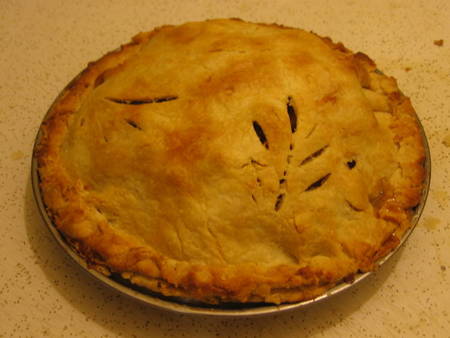