It is Friday afternoon and I have a metric buttload of quizzes, homework, and papers to read and grade as well as more lessons to plan, answer keys to prepare and send out over email, and wine to drink. It's so-far-so-good with season two of Doctor Who; I'm looking forward to Torchwood.

School wants lawsuit over gay discussions dismissed: “Officials from a suburban Massachusetts school district asked a federal judge Wednesday to dismiss a lawsuit filed by two couples who claim their parental rights were violated when homosexuality was discussed in their children's classrooms.”

That's just the first paragraph to the brief article. The great part comes later from the lawyer (Robert Sinsheimer—look, there is sin in his name!) for our Homophobes of the Day™, the couples who filed the lawsuit (Tonia and David Parker and Joseph and Robin Wirthlin). To quote the lawyer: “What they fear is that their children are being brainwashed.” Oh. My. It's that Evil Gay Agenda™ again; it's the Protocols of the Elders of Rainbow™ ... what the bleep™ is wrong with these rodent-brained, hate-mongering wackjobs?

I wonder what sorts of discussions the parents have at home with their kids. “Remember, Billy, if you see a gay person, you should spit on them and tell them that they are going to Hell™” And, “Now Sally, what do you do if your teacher is a lesbian? That's right, tell us and we'll get her fired.” The parents likely stay up at night in their marriage bed contemplating labor camps, Sondereinsatztruppen, and special chambers with special showers. “Arbeit macht Hetero!“ they chant instead of counting sheep, combining the Protestant Work Ethic™ with 20th-century ethnic cleansing.

Oh, wait. I'm exaggerating? Sort of like that non-existant gay-agenda to brainwash kids. I guess I'll have to go think about this more carefully.

Today I think I'll steal from Jasmine, who came across both a quote from L.M. Montgomery and some nifty digital art of the photograph + photoshop variety (not that I can judge what the technology behind the pictures actually is).

I'd like to add some beauty to life. I don't exactly want to make people know more ... though I understand that is the noblest ambition ... but I'd love to make them have a pleasanter time because of me ... to have some little joy or happy thought that would never have existed if I had not been born.
—L.M. Montgomery 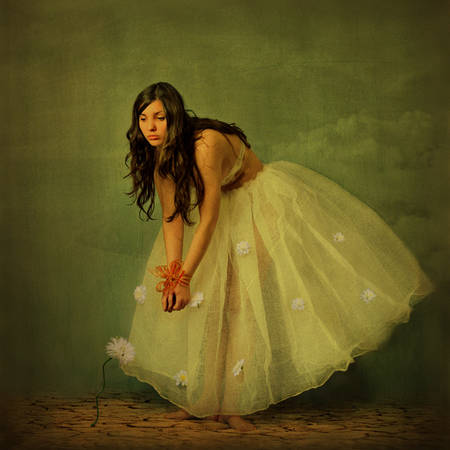 The artist has a larger gallery of works. Everything is in Russian and so I can't really say much about the artist, names of the works, etc. Artists even, perhaps. In style they're all of a sort, a light-surrealism that takes photographic portraits and provides fantastic backgrounds, imaginative costumes, altered physiology, etc.

Steven Pinker was on the Colbert Report, and while I do not watch the show itself, I found this clip terribly amusing, the perfect beginning to an otherwise cold and plain Friday morning. Thanks, Angela.

It warms a linguist's heart, even that of one who is only a linguist at heart.