In the Kitchen with Krause #16: Blackberry Pie

I bought some frozen berries a while back and decided to make a pie Thursday night. The recipe is simple and can be completed in a few minutes along with half an hour to forty-five minutes for baking.

Before getting to the pie we have to start with the pie crust.

Aside: if you are using the pie crust for a top-less pie, such as pumpkin, or any other for which you need a pre-baked crust, bake the bottom crust in the pie tin at 450F for 10–12 minutes or until golden brown. 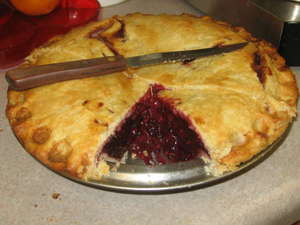 If you are using frozen berries—likely if you're baking such a pie in the winter—first thaw the berries thoroughly and drain the liquid/juice. I just poured them in a bowl and then tilted the bowl to drain them, but a fine-mesh strainer works well. If the berries are not properly drained, then either the resulting pie will be too full of liquid and essentially fall apart—bleed out—when cut into slices, or you will have to add too much flour or corn starch to absorb the water/juice, resulting in a doughy, gummy filling. If you are using fresh berries, this is less of a concern.

I had purchased some berries several weeks back. And then last Sunday evening I decided to make the pie, so I started to thaw the berries, but at the last moment I realized I had little desire to deal with the potential mess of the dough, so instead just threw together a few loaves of banana bread and put the berries back in the freezer. I took them out again Tuesday, and noticed that one bag had developed a leak, so I had to put them into a bowl, which I covered and put in the refrigerator once I realized that I would not be baking that evening, either.

Thursday I went shopping and bought three more bags of berries; I only really needed one more, if the berries in the refrigerator were still good, but just in case I bought three. These are 12 ounce bags (340 grams), and instead of measuring four cups—volume—I decided to just use three bags—mass/weight—and end up with a slightly more voluminous pie, which is rarely a bad thing. In comparison, an apple pie generally takes eight to ten cups of sliced fruit. Because apples (or peaches) are more solid than blackberries, raspberries, and boysenberries it's possible to use more fruit in such pies and maintain a dense, solid pie. Berry pies tend to have softer interiors.

While some of my earlier berries had suffered some freezer burn and burst a bit, resulting in quite a bit of juice once thawed, when the third bag thawed I had only well-formed, tender berries.

Once the berries were ready I turned on the oven and began the crust.

Making a perfect pie crust is an exercise in what one might call lax precision. I need two cups of flour, but while I avoid using heaping cups or those that are missing too much content, I do not bother leveling the cups with a knife or similar object. When adding the shortening I make sure there are no air pockets in the 1/3 cup measure, but at the same time I level the scoop only marginally. I use five or six tablespoons of water usually, but with the dry air in the apartment six and half were used this time.

A spoon to scoop the shortening and fork are the only utensils necessary to make this pie, along with a few bowls (flour & sugar; berries; dough) and a rolling pin. If you have a pastry cutter, use it, but a fork works well enough when making the crust. Mix the the flour and salt, then add 1/3 cup shortening. Crisco™ now offers a version free of trans fat(s)—it's the green container, whereas blue is traditional and yellow is butter flavored—and in the butter & margarine area of your grocery store you will likely find stick-shortening (generally 1/2 cup per stick, just like butter). At the local co-op they offer Earth Balance™ “Natural Shortening,” which is 100% vegan and non-hydrogenated.

When making pie crust you want to use either shortening or lard. Butter, margarine, and vegetable oil—two of the three of which are perfectly good pantry items for use in cooking—can be used, but if you're looking for a light, flaky texture, you want lard or vegetable shortening.

If a crumbly, mealy crust is desired, oil is the best shortening, while recipes for flaky crusts will call for lard or solid vegetable shortening. Lard, the traditional favorite, produces superior flakiness because it forms crystals so large that they give the fat a noticeably grainy texture. However, lard tends to go rancid relatively quickly, and this fact, together with the bad reputation of cholesterol and saturated fats, limits its popularity today.
(McGee 314)

My step-mother makes quick crusts with flour, salt, and vegetable oil, but while such a crust is simple to make and difficult to mess up (my mother, who always made shortening-based crusts, never got them right), it takes only a few minutes longer to cut in the shortening (you still need to roll out the dough, oil or shortening, after all) and since shortening provides what many consider a superior texture, I go that route. The other key is to have extremely cold water; toss a few ice cubes into a glass of cold water, or if none are available, put a glass of water in the freezer for a few minutes. Following this procedure—shortening, a fork, and ice water—I have never made a bad crust.

Using the fork I cut in the first 1/3 cup of shortening until it was the size and texture of cornmeal; this stage makes sure the shortening is evenly distributed. Then I added the next 1/3 cup and before I started adding water I wanted the mixture to start clumping a bit, with clumps the size of peas more or less. I then sprinkled in the first tablespoon of water and tossed the flour mixture around. You push the wet(ter) dough to the outside so as to reveal the still-dry mixture toward the bottom of the bowl. After five tablespoons judge whether you need any more. If you could form a compact ball from the mixture at that point, stop. If, as was the case here, the air is really dry, you might need to add more water. Wrapping the dough in plastic wrap and setting it aside in the refrigerator allows it to hydrate a bit more, but I rarely bother with that stage, except, occasionally, with what will become the top crust.

Instead of flouring my counter and rolling pin I tool the easy, no-mess way out: wax paper.

This is a solution that works well for rolled cookies as well. Tear off two pieces of wax paper, at least 12" long but preferably 14" or so. Put a ball of dough in the middle between them and roll out the paper-dough-paper sandwich. The dough will peel off the paper with no effort or stickiness. I lifted it off the paper and laid it in the pie tin, making sure to avoid air pockets, which would cause the crust to buckle when baked. The crust tends to overhang the edge of the tin by half an inch to inch or more, but I leave it that way until I attach the top crust.

I then turned my attention to the filling. My berries were thawed by this time.

In a cereal bowl I mixed the sugar and flour with a fork, then poured the mixture over the berries, tossing the fruit with the fork to spread the sugar. The flour serves to soak up excess moisture, and the small amount used (1/3 cup) does not affect the flavor much. At last I added the lemon juice and poured the entire fruit mixture into the pie tin. I set aside the pie tin and rolled out the top crust just as I had the bottom.

Before adding the top crust I added several tablespoons of butter to the top of the fruit; I sliced off several pats of butter from a stick and placed four of them evenly around the pie. I attached the top crust, adjusted it, and pinched down the edges. I sliced off the excess top and bottom crust and then fluted the edge with my fingers. I feel no need to make my pie overly artistic or fancy; it's just going to be eaten. Into the top I cut several vents to allow steam to escape in baking, opting for something vaguely leaf-life in design.

The final step before baking is to brush on a coat of milk to the crust; the milk helps with browning. If you do not have a brush, either spooning the milk carefully over the crust or dabbing it on with a paper towel will do in a pinch. The milk might very well collect in pools in the fluted edge region, which is no problem.

I slid the pie in to the hot oven and left it alone for the next forty minutes. Unlike with nut breads, brownies, or apple pies, where the doneness of the interior is of concern, with this sort of berry pie, the only thing we really care about is the doneness of the crust. That is not to say that we do not care about whether the interior is done/cooked, but rather that unlike with batters (brownies, quick breads), in which the middle/interior needs to firm up (and we're dealing with egg products that should become hot enough), and hard-fruit pies (apple pie, in particular), in which the cooking process helps to soften/tenderize the fruit, except for solidifying the filling, cooking the interior has fewer health or taste benefits here, and a minute or two more or less will not effect the doneness of the filling. Once the crust is golden brown the pie is done. There is no need to poke a knife into the pie.

With this particular pie I let it cool on my range for a while, then covered it with aluminum foil overnight but left it on the stove, and in the morning I carried it, covered, to campus, where I set it out for colleagues to eat. It was quickly consumed, but for the final slice. Nobody wants to take the last cookie, the last slice of (banana) bread, the last brownie, or the final slice of pie, but I wanted to take my tin home so I put the final slice on a paper plate, washed the tin, and gave the final slice to a professor who hadn't yet had any.

The interior remained rather firm, at least until the last slice, and the filling was not overly sweet. The crust was perfect, not only in color, but also in texture and flavor. The pats of butter added before baking add a butteriness to the flavor that the shortening-based crust itself cannot provide.