A Tale of Two Cities

For years I have enjoyed the Madison Farmers' Market, a warm-month Saturday event around the Capitol Square that at the least brings me spicy cheese bread from Stella's Bakery. In August I had the joy of visiting the Boise equivalent. 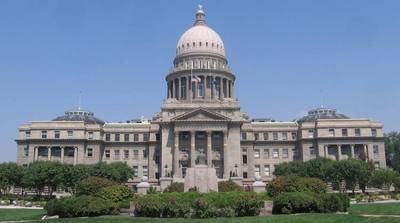 I've seen a number of capitol and parliament buildings in my day; I still have a huge soft spot for the very, very gothic and pointy parliament building in Budapest along the Danube. It has presence, it is not hidden, nor does it rely on a large grassy area to set it off. It is simply the most majestic building along that stretch of water.

I grew up with the Idaho capitol, and it was there in 1993 that I served my legislative internship. At that time at least there was a wonderful underground tunnel from a nearby parking garage (and likely from other locations) to the basement of the complex. All very Alias. I had some great conversations in the cafeteria; as a high school student it offered a place not where we could get away but where we could get away and be adults. Similar to standing in the rotunda standing against a marble railing and overlooking all the outsiders. We belonged there.

On Saturday August, 26 my father and I took an afternoon trip downtown, parked a few blocks away, and walked toward 8th Street and such. The Grove. A modest outdoor market, already toward the latter part of its weekly spectacle, was still going strong. We tried some wine, bought some bulbs, and just took in the atmosphere. Here was a hint that Boise, center of a growing suburban landscape, had the potential to develop a lively downtown. Those who live there might already know this; Hyde Park has been around for ages, as has the North End, but the vast majority of those living in the Treasure Valley limit themselves to the Boise Towne Square Mall and similar outlets. Drive. Park. Get In. Get Out.

But just to mosey?

We found plenty of handicrafts a few blocks south. We returned north, then west, where I found a great independent bookstore. I bought nothing. Then north again, and I found a used bookstore and spent quite of bit of time exploring its two levels before exiting, again without a purchase. Eventually we went east and ended up near the capitol before heading south again. Back at the former market location we found outdoor seating at the Dawson Taylor coffee shop.

What a great mocha.

At the end of August I returned to Madison, to the hostel, to campus, to the farmers' market and spicy cheese bread. Idaho's capitol building is traditional in construction, two chambers, one on either side, a huge dome in the middle. It contrast with Ohio's, which resembles nothing more or less than a roll of toilet paper upon a box of facial tissue. Oregon's is likewise abstract but offers modest architectural charms in exchange. Wisconsin's is a giant X from a game of tic-tac-toe and thus has four wings. It's a mutant insect, not a bird.

In the middle, under the dome, one finds huge allegorical mosaics of impressive artisanship. The quickest route from one corner of the square to the opposite is through the capitol, and during business hours at least it is no trouble simply to continue from State Street across the intersection, into, through, and out of the capitol, and on to King Street with only two revolving doors in the way along the way.Government by pedestrians by pedestrians.