This spud's for you

A potato picture and some links, that's all I can squeeze out this Saturday.

When I was talking to an acquaintance about Kass Fleisher's Accidental Species I had a hard time not writing Fleischer; I also wanted to write it Fleischmann with two ms. I was using translations of Rilke by J.B. Leishman—again, I really wanted to write Leischmann.

So it is that I wanted to write schriveled potato. 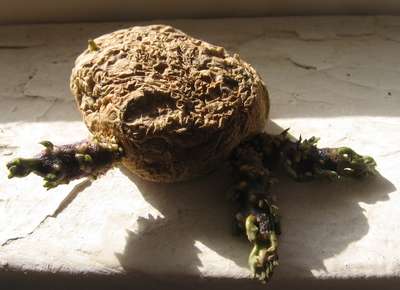 I guess I bought potatoes at Woodman's shortly after I moved in, but I never used any of them. It's possible that I instead inherited them from Rainer. I let them sit on my kitchen counter and as time passed they sprouted little green things from their eyes and then they dried out. Then they shriveled up a bit. Eventually I realized they might—just might—make an interesting photograph if I could get one in the right light on the window sill.

And now a link or two: