Early in the afternoon I moseyed out of Van Hise and began my walk over the hill. The slushy half-snow was in that below-freezing-yet-liquid stage, much like ice cream but without the sugar. Lo and behold! Upon Bascom Hill not far from Abe stood Bucky! 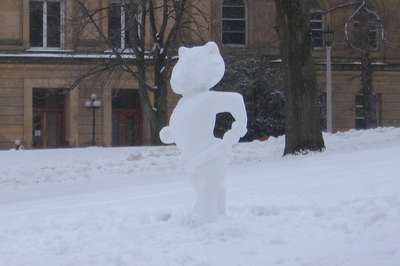 I had just passed the Y-intersection: if one heads left one goes toward Helen C. White and the Union past Science Hall; if one continues right-ish the path is straight down the hill past North Hall parallel to a similar path on the other side of the hill to the right that passes South Hall, the law school and Mills.

Two undies, a man and a woman, walked my way and were chatting. They then looked left (my right) to the swath of snow on the hill, I paused, looked, and also saw the life-size Bucky Badger—Buckingham U. Badger—molded in/of snow and was glad I had my camera in my pocket. I could not get close enough to get a good angle, so settled for a slightly zoomed snapshot from the snow- and ice-free path. Chemical de-icing agents made it safe for walking.

As Bucky was of snow and the ground was covered in it, it was hard to get a sharp contrast between the sculpture and the background. What is admirable is that despite this lack of contrast it is so readily recognizable as Bucky; it's the pose, the position of his arms, the strut.

Badgers are not rodents, but they prey upon them (moles, squirrels, prairie dogs, gophers ...); instead, they're in the same family of carnivore as ferrets and weasels and otters.

Speaking of rodents, a rat is supposed to play a symbolic role at the end of The Departed, but that's just one of many Oscar-winners that I haven't (yet) seen, so I can't really comment at this point.