In the Kitchen with Krause #17: Sandwich Bread

The Betty Crocker white bread and wheat bread recipes are simple and produce a nice loaf of bread, but while what is produced is fine for toast or French toast, or even for a little butter and honey or jam on top, it's not right for sandwiches, and so I searched and searched for a sandwich bread recipe. I found one I like, and minimal photo-documentation is included.

“This simple loaf has so much more flavor and character than store-bought white bread. It makes the best tuna or egg salad sandwiches. I toast Day-old slices for BLTs made with thick-cut bacon and end-of-summer tomatoes.” 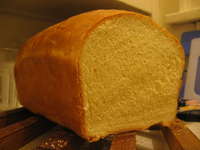 “Fluffy White Sandwich Bread may be wrapped in plastic and then aluminum foil and frozen for up to 2 weeks.”

There is not much in the way of play-by-play that has to go on here, but I'll provide a little value-added documentation just because.

This recipe differs from the Betty Crocker white bread in two major regards: it uses whole milk rather than water, and you proof the yeast first in the milk before adding it to the flour mixture.

I have thermometer for cooking and baking that is calibrated and marked to deal with the right temperature for getting yeast going, so I heated the whole milk in a pot and checked its temperature before adding the yeast and letting it sit for five minutes doing its thing.

While that was going on I poured the three and a half cups of flour, the salt, and the sugar into a bowl and mixed them briefly. In a separate warmed glass I dropped two tablespoons of butter (chopped off a 1/2 cup stick) and let the butter soften.

Once the yeast was ready I poured the milk-yeast and the butter into the flour mixture and used my electric hand mixer to combine all the ingredients. Because some of the yeast had, despite stirring, clung to the bottom of the glass, I added a tablespoon or two of warm water, swished it around, and added the extra yeast. The air in my apartment is dry, and I suspect the added moisture in the dough only helped. Once the flour was completely moistened and the dough started to come together I spread a small handful of flour on the counter and dumped out the dough onto it. The bread hooks for my mixer were nearly clean.

This dough provided me with the most fun I've had kneading in some time. It was stretchy, picked up the flour on the counter, and even once there was no excess flour available it stayed relatively non-sticky in my hands. It remained moist enough that it formed easily into a ball and did not flake off chunks or leave crevices/cracks in the dough once it was turned into a ball.

Using some shortening I greased a bowl—I do not have any cooking spray—put the ball in the bowl, and covered the bowl with plastic wrap. I set it near a heating unit in my living room, and the air near the bowl was probably around 70F. This was a Monday night activity and I started working on the loaf during the half hour before Heroes on NBC. I finished kneading it and wrapping it up right as the show began, which is to say, about fifteen to twenty minutes after I heated the water and added the yeast.

The recipe says to let the dough rise an hour or hour and a half; I returned to it at about 9:05p.m. or 9:10 and it had already more than doubled in size. I could see a few droplets of moisture clinging to the inside of the plastic wrap.

I took off the plastic, poked the dough—the indentation stayed—,punched it down, and dumped it onto the counter. Instead of rolling out a 9"x18" sheet as one does in the Betty Crocker recipe, I just went for something six to nine inches wide, and perhaps a foot long. I rolled the dough into a loaf, pinching it together slightly after each roll/turn. The loaf broadens/widens as you roll. At the end I pinched the seam, turned it seam-side down, and sealed and folded under the edges. I had greased my metal loaf pan with shortening and placed the loaf inside it. There was plenty of room on all sides. I wrapped the pan in plastic (reuse the old plastic!), put a cloth over top, and put it near the same heater I had used to let the dough rise the first time.

I returned an hour later to a loaf that now filled out the pan. I had already heated the oven so just removed the cloth and plastic and slid it in the oven for nearly the full 50 minutes.

After that time it sounded hollow when tapped, so I removed it, and while it cooled I spread a little butter over the crust.

I let it cool a full hour or more before I sliced into it, and the bread that awaited me was not an artisan loaf, some crunchy French, Italian, or German bread, or a dense European whole grain affair, but just a warm, tasty, and rich white sandwich bread.

Tuesday afternoon I used it for both tuna and peanut butter sandwiches.

Cheap sandwich bread at the store runs $0.80 a loaf, occasionally a bit less on sale, and decent white bread for use in sandwiches is generally twice that. Unless you want a bread made mostly from high fructose corn syrup as a sweetener and food for the yeast, you'll have to pay upwards of $2.50 or $3.00 per loaf.

In contrast a five pound bag of white flour (non-organic) runs $0.90, milk $2.00 a gallon, give or take, and butter $1.80 for a four-pack of unsalted sticks. Yeast is $0.40 per packet, and the amounts of sugar and salt used are negligible. The effort involved in making this loaf is a matter of kneading for ten minutes, exercise that anyone not only could but should undertake. I feel comfortable in saying that when it comes to ingredients, the cost of his loaf is near or less than $1.00, with nearly half that amount coming from the yeast (assuming you use 2.5 teaspoon packets of active dry yeast or similar), but the result surpasses breads you would spend twice as much for.