In the Kitchen with Krause #18: Pumpkin Pie

Once you have a pie crust waiting for you few pies are easier or tastier that the pumpkin pie. And since I had a can of pumpkin and a can of evaporated milk in my cupboard, I thought to myself, self, it's time to make a pumpkin pie. A few photos are included. 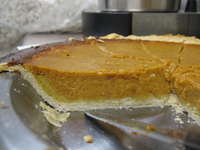 There are numerous ways to acquire a pie crust, including theft, which I do not advocate. The three main options are a pre-baked pie shell in its own tin, a pre-made but not baked pie crust from your grocer's refrigerator section, and making your own. And when it comes to making your own, the options are a graham cracker crust (not really appropriate for this type of pie), an oil crust (which is quick & easy, but not the tastiest solution), and a shortening crust. One could also make a butter or lard crust, but shortening generally makes a flakier crust than does butter and there are now trans-fat-free shortenings available, and while lard produces the flakiest crust, lard is harder to find in many stores and adds what many consider a “gamey” flavor.

My normal pie crust recipe (2 cups of flour, 1 teaspoon of salt, 2/3 cup shortening, and 5–6 tablespoons of ice-water) can be halved if you only want to make a bottom crust, and it takes at most five minutes to properly mix the ingredients and roll out the crust.

The filling itself is one of those things that comes from the back of a pumpkin can, and there is little difference between the recipes found on Shurfine cans and on those from other brands. In short all you're making is a pumpkin custard of sorts: egg, milk, sugar, spices, and pumpkin. We have friends of the family who are allergic to cinnamon and so versions made with allspice are often brought to gatherings. Alas, due to diabetic family relatives we've also seen low- and no-sugar varieties.

But when it comes to the squash you use, pumpkin isn't actually necessary. Hubbard squash makes an equally good (some say better) pie. The recipe given here will, if you're using a standard pie tin, produce too much filling, at least a cup and closer to one and a half to two cups too much. If you double the filling recipe above, you'll have enough for three pies. My solution is to make pumpkin bars (or pumpkin cheesecake) from the remaining mixture. If you instead have fresh squash available, you can rather easily cut the filling recipe by about 1/3 (or: cut the sugar, pumpkin, and milk, leave the rest).

I baked the pie—the Shurfine pumpkin can recommends placing the pie tin on a cookie sheet in the oven, but I didn't bother doing so—and once it had cooled I put plastic wrap over the top of it and placed it in the refrigerator.

I whipped 3/4 cup heavy cream and added some powdered sugar (a tablespoon or so) and let it sit overnight. I put it in an old oatscreme container I had that held about 1 pint, which was the right size for the amount of whipped cream I had, and took it along with the pie to the department Wednesday morning.

This particular pie slid right out of the tin. I cut twelve slices, and not a one of them stuck to the pan. The crust was light and flaky. Looking at the pie in cross-section you see the filling and the crust, but also a slightly yellowish layer of filling bordering the crust.