Pancakes and Sausage on a Stick

I consider myself an open-minded individual, not a picky eater, someone open to new experiences, but somehow I do not see Jimmy Dean Pancakes and Sausage on a Stick in my culinary future. Now with chocolate chips! 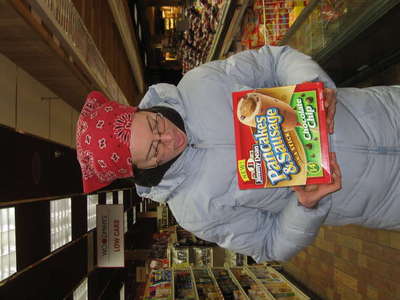 Pancakes and Sausage ... on a Stick!
closeup

I swear, it's like Snakes on a Plane! (saw it, enjoyed it, now move along), or, Hyenas on a Leash!

I must admit, however, that many meats go well with sweet dishes or toppings. What would a pork chop be without apple sauce? But chunks of low-quality sausage with chocolate chips? The only relevant question is: whose idea was it?

Back at Mary McPherson we never had hot dogs for lunch, but we did have wiener wraps (yes, I know that sounds like a bad marketing campaign for a brand of condoms), which were sort of like a cross between a hot dog and a corn dog. See, like the corn dog the wiener wrap was completely enclosed, but, and here it was like a hot dog, not by a type of corn batter but by an actual bun. How they got the hot dog in there is anyone's guess; it's sort of like getting a fully constructed ship inside a bottle, though everyone knows that in such a case you actually put the ship together piece by piece with small tools inside the bottle; the completed ship never exists outside the bottle, much like a Bubble Boy, who for health and immune system reasons can never step food outside his bubble without catching a stray bug, be it virus or bacteria, and dying a horrible, After School Special death.

But the wiener wrap ... had someone composed the sausage from tiny sausage particles inside the bun by injecting the tiny particles one-by-one into the sealed bun? Had the bun really been two parts that were then glued together, preferably by the cooking process?

Pillsbury has a Wiener Wrap product, but even the most cursory of inspections will demonstrate that it's just not the same thing; in the Pillsbury case the wrapped wiener extends on either end beyond the bounds of the bun.

To conclude I can only recommend Dave Lister's commentary on the tasty wiener wrap, “The Wiener Wrap Tribute (for the 40th anniversary of the JFK assassination).”