In the Kitchen with Krause #20: Battenberg Cake

Reading Jasper Fforde's novel Something Awful led me to Battenberg cake, which is the treat-of-choice in that story, the type of thing that Otto von Bismarck absolutely loves. It is named for the Battenberg family, (English) members of which renamed themselves Mountbatten during WWI. I decided to make such a cake for myself upon finding out, after reading Fforde's novel, that it is a real food. 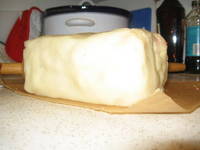 one plain piece next to one coloured one, and then vice versa to make a checker board effect.

I took this from the St. George's Day Battenberg Cake entry over at bron marshall. Foodie websites are incestuous, as one notes here, for I reference bron marshall, which links to the well-known Becks and Posh ... and so it goes.

The short answer to what a Battenberg cake is goes as follows: using jam, preferably apricot, as a glue, fit together red and yellow cake segments into a checkerboard design and coat in almond paste or marzipan (the latter has more sugar and less almond content than the former). As for the red and yellow or red and white, just use food coloring. This simply means that if you know how to make a white or yellow cake, preferably of the slightly denser variety, you do not need a separate recipe to approximate the dessert/treat/whatever.

The recipe I'm using I found on bron marshall, and an alternate design, a St. George's Day emblem/flag, is provided. If one is in the U.K. one can buy a Battenberg in the store; in the U.S. something similar is sold at IKEA I've been told.

After my students discovered that I'd taken a strawberry-rhubarb in for my colleagues on Monday they nearly demanded that I bring them something, and the German-connection with the Battenberg makes it appropriate.

In a small bowl I pre-mixed the flour and baking powder. I set the oven to 350F and went to work on the butter and sugar; I had let the butter sit out a while to soften. A stick of butter is about 113g, so 1 1/3 sticks will get you to the 150 desired by this recipe. Similar recipes call only for 110g or about 4oz. of butter, that is to say, one stick. You can use a hand mixer, especially for the creaming stage, but after that you might as well just use a spoon or similar, for this is not a particular dense batter to stir. Beat in the eggs one at a time, and then, using a plastic spatula, fold in the flour mixture. I then added the milk. The resulting thick batter more closely resembles a soft cookie dough than anything else.

Using parchment paper I divided my 8"x8" brownie pan in two. I spooned half the batter into one half and smoothed it a bit. I added a few drops of red food coloring and re-folded/mixed the remaining batter. A few drops is all it takes, at most. And remember that such food coloring stains; my right thumb still looks bloodied. I spooned in the pink batter into the other side, smoothed out the sugary concoction, and placed it in the oven.

The batter is thick enough that a physical partition is not necessary, I think. Others, I've seen, have simply baked the two colors separately in two small loaf pans of the same size.

After forty minutes I removed the pan from the oven, let it sit a few minutes, and then turned the contents out upside-down on a wooden rack of sorts that I have; I haven't gotten around to buying a metal one for such purposes. I pulled off the parchment paper and let the two cake segments cool.

Once they had cooled I cut them to size and shape, heated some apricot jam, and began to glue the slices together. Depending on the sugar content of your jam you might need more. The 1/4 cup in this recipe was very optimistic—I needed more than twice that, especially when I got to the outside of the brick and was about to wrap it in marzipan.

Ah, the marzipan. I bought a couple tubes of it at Woodman's, about 200g each. The recipe I used called for 250, but I do not see how that amount can be rolled out thin enough to wrap all the way around. I think 275–300g is more realistic, even though you might get a little bit of bunching when you fold and pinch together the ends. I rolled out my marzipan between sheets of wax paper with a rolling pin, but a segment of it stuck to the paper and when I attempted to peel it off, after having wrapped it around the cake, it tore a bit. I patched it up with a sheet of marzipan taken from the second tube. To smooth out the seams I got my fingers slightly wet and smoothed things out that way. The result looked reasonable enough for a first attempt.

I put it in the refrigerator to set a bit, and later wrapped it in a mix of wax paper and aluminum foil, the former to avoid things sticking, the latter because it made it easier to carry, since wax paper doesn't like to stay in place. Plastic wrap would have worked well. I carried it to class, unwrapped it, and sliced it with a sharp knife. I made about 12 slices from it, but had I been more careful I could have gotten a few more. As it was, those 12 were the perfect number, since not all my students wanted some.

The result was was moist enough, although it dried out quickly when exposed to air for a long period, and Regina recommended using three rather than two eggs, which would have produced something more definitely cake-like. Those who ate it praised it, and one student asked how I'd gotten the marzipan in such an even layer around the loaf/brick/cake. Contrary to my expectation(s), it was not too sweet.

I won't be making it often; tubes of marzipan run $4–5, but for special occasions it's not a bad alternative.

I leave you with the following from the Seven Wonders of Swindon (Jasper Fforde humour):

Although this system might seem byzantine, time wasting and needlessly expensive, the high level of bureaucracy involved elevated The Seven Wonders Choosing Procedure to become a Wonder in its own right, and was only narrowly pipped to the long shortlist by the inclusion of Mrs Next's excellent Battenberg cake, an inspired piece of cakeology that kept the committees working during the many dark hours of painful selection.