In the Kitchen with Krause #21: Classic Creamy Cheesecake

A while back I bought several packs of budget (shall we say?) cream cheese at Woodman's (Crystal Farms) when it was on sale, but as its sell-by date approached I hadn't actually gotten around to using any of it, so Wednesday evening, that date now past, I decided to just make a big batch of simple cheesecake. 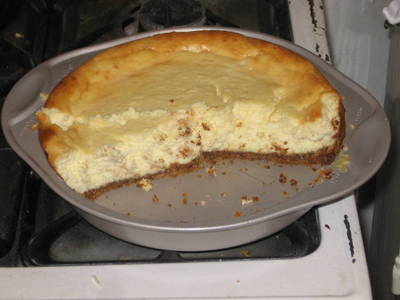 Cheesecake can be fancy, can be spiced up, and so on. But at its simplest it is just cream cheese, sugar, and eggs mixed together and cooked on a crust. When it comes in a box/brick, cream cheese tends to be 8oz. by weight, or half a pound. A simple rule is 1/4 cup sugar and 1 egg per package of cream cheese.

It's hard to really screw up cheesecake; it's rather forgiving, I think. I just had a lot of cream cheese to get rid of, so used all of mine in one batch, which did, however, result in one rather deep cheesecake.

I had a 9" round pan I purchased a while back and decided to use that; a spring-form is rather standard for this sort of thing so you can remove the cheesecake from its “pan.” It might be prettier that way, but I wasn't really concerned with pretty.

When it came to the crust I had no graham crackers on hand, and a graham cracker crust almost seems traditional, but I had no desire to head out in the evening looking for crackers of any sort. I didn't have any stale bread or bread crumbs, etc., so went for a tasty, simple, nutty crust:

Cut the butter into the dry ingredients with a fork, and then mix with your fingers. Push into and spread around the base of the pan, and bake for 10–15 minutes at about 375F.

Add a quarter to half a cup of oats for something more granola-esque.

After the crust was ready I spooned the filling—I made it more or less as directed but decided to leave out the lemon juice—into the pan, and it came to the top ... that is a lot of cream cheese, after all. A half-batch would have been fine, I suspect. Once it finished baking it puffed up a bit, but did not overflow the rim of the pan and no mess was made.

I let it cool and then covered it and put it in the refrigerator. Thursday afternoon I had a slice or two. Very tasty, quite dense.

“No love, no care, no trying to work it out, no nothing.”

“Why would you fucking lie to me?”

“How can you look at me and see me and all that we've been through and just give up?”

“You make me fucking cry! Fucking cry!” (something thrown)

(all of the above from/by a neighbor)

I think my neighbor could have used some cheesecake; it calms even the most frayed nerves.