The D and G Gang-Rape

Anger brewed first in Italy and then in Spain regarding one of the most recent Dolche and Gabbana ads featuring a smooth-skinned, topless guy in dark shades holding down a bare-legged model in a dark dress. 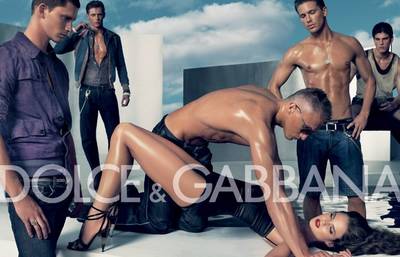 The gang-rape nature of the ad should be rather clear; one muscular man holds down a women while four others stand around and observe. Some have discounted this interpretation because she doesn't seem to be fighting back, others because they argue the men are obviously gay or that the ad is supposed to appeal to gay men, not to hetero men. In the end I find it tasteless but hardly worthy of controversy.

That having been said the image itself is fascinating. It seems to seek to turn live models into mannequins. Just look at all the figures in the piece, all six but especially the four standing men. The woman is caught in a moment, but posed; no tension can be seen in the legs holding her up, her eyes are dead, and the only color she offers besides the perfectly tanned and smooth skin is that of her colored lips, her colored eyes, her perfectly placed and organized hair. The men (re)present different types of men: left-back we have a drifter, right back a more urban thug, right middle more of a laborer except for the jean-shorts ... with the front two it's a bit harder to pigeonhole them, but they all have a couple features in common, especially the hairless aesthetic. Mr. Front-Left, especially, works well as somebody's near-Nazi-ideal; he's just not blond enough. And they're all just so amazingly ... dead.