I've got your St. Paddy ... or: whoring sea donkeys

Forget the Guinness-Holiday, the booze-equivalent of all the Hallmark-Holidays clogging the calendar. Why do I care about St. Patrick? So it's the national holiday of the Irish people ... got any Irish in ya'?

My step-mother likes St. Patrick's Day, and I suppose if you're stuck in Boston or some other such place you're stuck with rivers being dyed green and all that.

Forget the Guinness-Holiday; have fun instead with the utter trash of pop-culture, the Pussycat Dolls (did you know that they're an award-winning and Grammy Award-nominated American music group?. Their beginning as a modern burlesque I can sort of respect, but that's a decade back. Salon's Heather Havrilesky covered them this weekend (dated March 18 but posted today), and begins with the line, “‘I think the Pussycat Dolls have had a large influence on my generation, and that's why I think I've gravitated towards their music.’—Natascha, 19” I can agree with that, but it seems to have little to do with the “empowerment” message the PCD are supposedly trying to get across; if anything, the group is tied to (as mirror of, perhaps) the insane body image and fashion crap one sees.

I'll just provide the image that was provided on Salon's homepage today (Saturday) when the article was posted there: 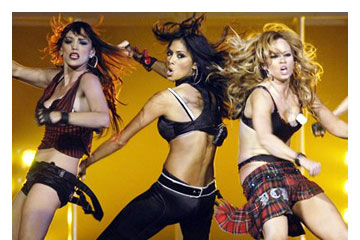 What have we got here besides (intentional) fashion tastelessness? We have no hips, we have boney spines, and lack of muscle tone. And for the most part rather dead eyes, and stringy gross hair that one can excuse, perhaps, because of the performance conditions, sweat, and heat from the stage lamps/lights.

This all only comes to mind because when I turned the TV on for some reason this last week I came across “Pussycat Dolls Presents: The Search for the Next Doll” on CW—as Havrilesky writes, “the latest television show to suggest that the whoring sea donkeys are storming the gates.” I'd never heard of it and thought at first I'd come across some next-top-model crap when I tuned at the end when someone was being kicked off. I think this was Wednesday and perhaps a rerun from Tuesday, since I would usually turn the TV on for “Lost” Wednesday evenings.

It's none of my business if people want to act this way, dress this way, etc., especially not if they're making good money at it. I'm no proponent of puritanical modesty, Mormon modesty, Muslim modesty, or, for the fashion conscious, muslin modesty, but you know it's a rather obvious sign of stupidity when women & girls want to do the whole anorexic, skanked-out look. There is a wonderful disconnect between the Pussycat Dolls rhetoric and the reality. This is, of course, all quite obvious, which is why I turn off the TV and return to teaching those who care to come to my classes. There is little point in bothering with those who want to emulate this.

And St. Patrick's Day is a lot like the Pussycat Dolls in this regard ... lots of emulation, lots of being like somebody else and fitting into a preexisting power or political or religious structure. I of course won't claim that Carnivale is necessarily emancipatory, but anybody who bothers with Rabelais and His World by Mikhail Bakhtin will realize that Carnivale and the carnivalesque have quite a bit in common with true burlesque as well as cabaret.