I was firsts introduced to the works of Mucha years ago during my undergrad period, probably when I was studying abroad in Europe, and likely when I visited the Fine Arts Museum in Budapest. It's not that they had Mucha, at least not much Mucha, but they had postcards and books and prints, and there was something in his art nouveau stylings that combined so-called fine art and advertising or commercial graphic design. Now he is just a style for others to emulate and translate to different genres; he has been grammaticalized, and that is not necessarily a bad thing.

I use the term “grammaticalization” in a nearly metaphorical way of which many of my linguistics colleagues would not approve. 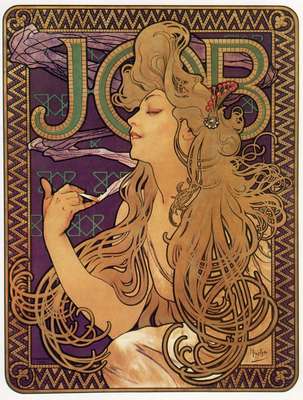 I occasionally, you see, like to go out of my way to avoid prepositions at the end of a sentence or clause. It is unnecessary. The results often do not scan well. And yet it amuses me.

“This is something up with which I will not put.” So the quote or misquote goes.

Grammaticalization. The term, in a narrow, linguistics sense, refers to lexical items becoming productive in the grammar (syntax, morphology) of a language. A prime example, a classical example, is the creation or development of definite articles in many languages. Definite articles fulfill a grammatical function, and, furthermore, the way in which they're tied to their particular nouns (see, they don't really work well away from their nouns, as lexical items on their own) also ties their forms to those nouns. If the noun is feminine, the article is feminine, etc. And when we ask, “Where did these definite articles come from?” the answer is often “from deictic elements.” From words for “this” or “that.” Or in the realm of indefinite articles a meaning-bearing, stand-alone lexical item (“one”) is often the source for the word “a.” It has become grammaticalized. We see this with prepositions becoming prefixes, etc. And many argue that grammaticalization goes only one way, but I know some who dispute this, and on top of that it's immaterial to the discussion at hand: the (metaphorical) extension of grammaticalization.

I put “metaphorical” in quotes and parentheses, etc., because whether or not the use is metaphorical—and a certain strict sense it clearly is—it is also a matter of how we treat language and rational systems.

Scientists aren't big on metaphors and analogy. They use metaphors and analogies, but they are also aware of the dangers of analogy, of the wrong directions it can lead people, lead thoughts, lead arguments. It's a nice heuristic but unreliable, so the argument goes. Analogy should be avoided in a rational system, and one way to do so—at least when you do not want to ban the results of the analogical extension—is to expand the rational system itself.

Analogy and metaphor are used to bridge gaps between incongruent systems and/or to extend knowledge from a known domain to an unknown or less-well-known domain. A similar relationship or similar features lead(s) to an analogical structure, a model, a bridge, and a term from the known domain is then applied and used in the newer, lesser-known domain as a metaphor. Grammaticalization is a term in linguistics, and even its roots are clearly in that domain, for languages have grammar. At a more abstract level it means to take an “element” and adapt or adopt or integrate it such that it interacts with the rules of a system. If in another system we find similar behavior it makes sense to use the same term if we don't already have a term for that behavior. At this point it's metaphorical, this usage, but it's possible to term it non-metaphorical if we instead expand what we mean by language, which is exactly what happened across many domains in the 20th century.

Grammaticalization can be seen as a property or function within linguistic systems, perhaps within semiotic systems more broadly, and within systems most broadly, if we see a system as a whole and as a collection of elements with rules that combine or relate elements into other elements of the system (a system is closed). Language is a system insofar as it consists of elements that combine according to rules to produce other elements of the system, and the combination of English words into sentences or expressions does not create Chinese words or sentences. But, as usual, I digress.

If one can call culture or at least subsets of cultural production or experience or expression a “system” (most broadly) or even a semiotic system (more narrowly), or, perhaps, a language (awfully narrow) then the use of the word “grammaticalization” in that context or discourse (when talking about music or the visual arts, etc.) would not be metaphorical; human language and the arts would be (merely) two concrete instances of a more abstract, idealized form: language or semiotic system.

I'm getting off topic, or, rather, off the topic I had intended for this post. In any case, this extension of rationality so as to exclude analogy and metaphor is not a mere thought experiment on my part; within the sciences and within, for example, the discussion of genes and memes, it plays a role. Are memes merely to information theory what genes are to genetics? To DNA? The component parts that self-relicate and are successful if they are passed on? Is the term meme an analogical or metaphorical extension of the gene? Or are both concrete realizations in two different realms (information theory, biology) of the same idealized form? The latter allows one to treat memes rationally and independent of genes; the former ties our knowledge about memes to our understanding of genes, and if the latter changes, so must the former, for the metaphorical or analogical bond, while not discursive, is still determinate.

Speaking of getting off topic. I just won't shut up.

Within Mucha's work one finds commonalities in theme and technique and, then, style. The individual work becomes part of a corpus, but even then it's a corpus of Mucha's work. When one works in the realm of parody or pastiche one uses Mucha's images as a source from which a “new” image is produced. I admit that I don't see this very often with Mucha; I do, however, see it all the time with Klimt, and not just Klimt, but “The Kiss” in particular. New Avengers No. 26 devotes a page or two to it quite explicitly, but works up to it throughout. The Japanese anime and manga Elfen Lied (yeah, they've got something weird going on with the way they appropriate German cultural artifacts) uses it for a title image, but reformulated; it's what you might expect if Disney did Klimt. I might call these appropriations non-grammatical; they still rely on knowledge of the original as such, as a particular work (or perhaps style), as a lexical item in the cultural vocabulary.

But loish's digital painting, “Smoking Fish” (above), which I found at deviantART, was never really a Mucha-pastiche (loish writes: “i have a blue wall in my room and i spent ages looking for the perfect poster to put up, but nothing was really personal enough. i wanted an art nouveau poster but everyone has those by now... so i drew inspiration from [Mucha's ‘Job’] to make my own version”), but, one might say, she grammaticalized the style, turned the Mucha-esque into something that could be used independently of the actual “Job” image (see: top of the page). This is the way or a way in which “style” can be seen or treated as that part or element or aspect of a work (or an artist's production/productivity) that can be “grammaticalized.” Which is to say, while we see “style” as that which is most personal, as that which “belongs” to an artist, makes that artist him or herself, it is, perhaps, actually that which can be abstracted from the work or corpus of works. “Style” is that which belongs least to a work or artist because it is what can be systematized and made productive for others. The same, however, is true with common motifs or myths or images.