This and That: Pirates say Argh!

I wish I could say ads on TV on DVDs and in the movie theater are the best reason to get one's “content” online. But then it might sound as if I'm advocating piracy. And I wouldn't want to do that. 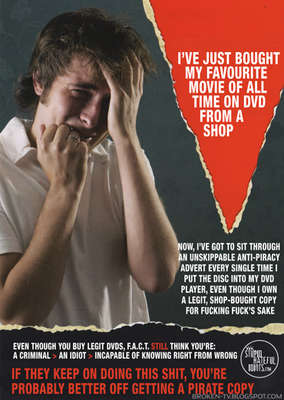 The image itself is tagged and claims its origin as broken-tv.blogspot.com, but the circled area cites stupidhatefulidiots.com; the former is a “real” website, the latter is not.

The URL (Uniform Resource Locator) was considered by many, quite idealistically, as something permanent. A numerical (IP) address might change, and would be difficult to memorize (not so much individually, but, they add up, do they not?), but something like amazon-dot-com? apple-dot-com? aclu-dot-org? Corporations became so enamored of their virtual “reality” that they ran Super Bowl ads dedicated to online stores, and every company had to gobble up every little variation on its name ... it was trademark law in the age of the internet.

And if URLs were permanent, or at least more permanent than they are, well, a number of things would be easier these days. URLs change—I admit it, I've changed my site layout and moved files and locations, I've even changed domain and site names a number of times—and URLs disappear, but for the average browser this is at most a minor inconvenience if an inconvenience at all, for we live in the Age of Goggle™ ...

Think back to the late 90s. The mid 90s. The Age of Bookmarks (no bold or trademark sign necessary; it's much weaker). Search engines were weak; instead we relied on indices, and if you found something you liked, you bookmarked it, lest you lose it and never find it again.

Browsers still have that bookmark feature. It's a convenience. But now that's all it is. In fact, they're more liability than benefit now, for every time I look at the entries in my bookmark list I have to try to figure out what the hell the page is, why it is that I bookmarked it. I haven't visited any entry in my (current) bookmark file in ... months?

And bookmarked links change and disappear. And not just the ephemeral personal pages, for “personal pages” are of two types: fossilized and ephemeral. If you check out a bookmarked link you saved years ago you'll notice either that it's gone or it's exactly as it was before. Fossilized. Neither is particularly conducive to a dynamic, informative internet.

We should, therefore, celebrate the Age of Google (the second time around it needs neither bold nor a trademark sign; it's been diluted). And yet ...

And yet there is or should be strength to the internet besides portals. If you are a mere content consumer of the sheeple variety you browse the same pages every day. You get your news from the NY Times or the BBC or something similar (I hope not Faux News), you might be getting it from Salon or Slate (or, if you're either dense or irony-oriented, The Onion), and you might also be getting your non-news from Slashdot or Metafilter or Fark or some similar aggregator; hell, you might just get your news from Yahoo or Google—and as a consequence most of the links you visit come from the Cathedral, the Temple. When you need something else you visit Google and search—either skillfully and in a single query or clumsily with several queries and much frustration and time wasted—or you use a similar service. If you're more than a casual member of the sheeple you might belong to or visit a “social networking” site or two, MySpace or the Facebook or perhaps something more media-oriented like Flikr. You have friends with blogs and you read them, so you're at blogspot and blogger and livejournal. And if you're either an old-school content-creator or perhaps just an out-of-work soccer mom with too much time on her hands, between scrapbooking and picking up the kids you write your own blog entries.

And when you write these entries you can provide your own content and you can include (and/or link to) content produced elsewhere. Talk about how the kids' father brought them back late from his supervised visitation, talk about the new scrapbook, comment upon and link to that apple crisp recipe, review the latest independent film showing in town, provide commentary above and beyond what came out of the book club discussion, show and link to a hilarious image, etc. But the two extremes, the two pure forms, are writing your own and linking to something preexisting, and it's hard to keep them separate, for if you have readers even if you stick to producing your own content someone might link to you; linked or included content is nearly impossible to avoid.

And we shouldn't want to avoid it.

But this brings me back to URLs and their now all-too-ephemeral nature. Perhaps, one might argue, the strength in blogs is that they are just a way of carrying on a conversation online, stretched out longer than normal. They're not just that ol' IRC chat, which, if someone saved the session, might be archived on a hard drive somewhere, or the good ol' USENET & news group days, which one often finds archived online ... woe to those immature teens who find their youthful flames now there in all their glory for prospective employers to find. The other metaphor was the blog as (new) journalism, and just consider how many “news” sites now carry blogs by their contributors. Before the term blog and before livejournals spread beyond the clutches of 13-year-old emo girls in a goth phase many of us were writing “online journals,” diaries of sorts, memoirs, and yes, they were meant for an audience out there, but they were meant for the writer as well, a sort of fossilization of thoughts or experiences or, rather, thoughts about experiences and other thoughts.

The problem to which I'm getting, at which I'm arriving, etc. is tied to a stylistic and semantic failure on the part of webpage writers, and it's a failure to which I have been far too often party: non-semantic links. That is to say, linking to deictic elements, words like this and that and the like, mere pointers. Few of us, when we turn the word this into a link, link to a page about the word or concept this; we generally mean “this page about XYZ” and webpage style folks have been telling us for years, make your link be “XYZ” or “story about XYZ.” The first reason is one of meaning for the reader, so that the reader, when reading your page, knows what the link is about before even clicking. Links then become keywords, the things you've highlighted with your radioactive yellow highlighter by the dark of night before that midterm exam tomorrow; they become keywords as in a card catalog, elements of an index, and so on. But—and this is also thanks to Google—most people no longer get to your webpage or your blog via the front door. If you're any good they're not everyday readers, your fans, those few, the proud ...

People get to your pages via search engines, and they get to blog posts and the like long after they've become stale, long after they were “timely.” Last year or the year before you reviewed The Secret History (which came out in 1992). And in 2007 someone interested in the novel finds your review that was your follow-up to your book club discussion. And even worse? All those this and that links you provided? Those meaningless, highlighted words? Those links are dead. Your new reader clicks on them and they don't resolve—the domain has disappeared—or a big fat 404 page pops up. You linked to another blog post, and that site has become defunct. You linked to a CNN article, but CNN has removed the story in question or renamed it or archived it.

URLs are not permanent enough. I'm guilty of moving things. I admitted this above, and I admit it again here, or, rather, I reiterate it. I could just link to the top of the page. But I digress. URLs are not permanent enough, and on top of that we far too often use meaningless linking words, so not only can we not see what the link was meant to show us, we do not even know what the dead link was meant to show us.

And, alas, this sort of URL-bit-rot makes the internet less useful. Not non-useful. It is still structurally sound from a top-down approach, which is to say, either by searching via Google (or similar) or by way of authoritative hubs, news sites and the like. It is likewise useful in the so-called blogosphere in a shallow sense: stay with current matters, read widely but not deeply, and there is a lot to see. But the deep, non-hierarchical internet ... that is diseased and (bit-)rotting.

And it is even more shallow and ephemeral than how I've portrayed it so far.

YouTube is our best example, and while it is its own fault in a sense, being a hub of or for pirated material that gets removed/deleted whenever someone complains, it also demonstrates this bit-rot and shallowness far too clearly. If I link to a YouTube video clip of an old music video that I haven't seen in years there's a good chance it won't be there when you get around to looking for it next week or the week thereafter. It's quite possible that multiple versions of the same source material are uploaded there, so when you can't find XYZ you can at least search for it and find xyz. Last fall I was able to find a version of Joachim Witt's video for/to “der goldene Reiter” but this spring it was gone, and only a live performance on RTL remains. Perhaps next week the original video will return. And other things, with their meaningless “watch?v=GXh7FM2tzCQ” designations, will remain for a long time, but for how long I do not know. It's a dynamic service but, alas, all surface.

I should not complain; there is more available now than there was last year. And last year more than the year before, and so on. And so on.